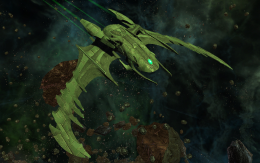 The Khopesh-class Tactical Dreadnought Warbird is a Tier 6 Dreadnought Warbird which may be flown by Romulan Republic characters, as well as characters of any other faction. This starship can be used from any level upon completion of the tutorial experience. As you level up, this ship gains additional hull, weapon slots, and console slots.

. It is also available as part of the following: the Cross Faction Flagship Mega Bundle for 12,000

, and the Romulan Fleet Admiral Faction Pack for 5,000

The Khopesh Tactical Dreadnought Warbird has a battle cloak that allows the ship to cloak during the combat, granting stealth and a damage bonus upon decloaking.

Purchasing the Khopesh Tactical Dreadnought Warbird also unlocks Romulan Drone Ship Frigates which can be equipped on any Romulan Dreadnought Warbird variant and Kelvin Timeline T'laru Intel Carrier Warbird. Romulan Drone ships utilize two unique pieces of technology. The first is Multi-Spectral Emitters, which allow them to take on the appearance of a limited variety of other types of ships. To support this technology, Romulan Drone ships are also equipped with Tri-Phasic Emitters. These change the frequency of the Drone Ship’s disruptors to emulate the weapon signatures of other weapon types, causing them to change both visually and functionally.