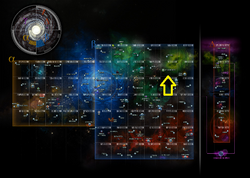 The Khaiell System is a system located in the Gasko Sector of the Beta Quadrant.

Khaiell Colony grew out of the Reunification movement of the late 23rd century. A mixed colony of Vulcans and Romulans, the Khaiellians have created a society that has elements of both cultures. The colony's leader, Sarr, is a former Starfleet officer and maintains close ties with many former shipmates. One of these friends is Admiral T'nae, the commander of Starbase 39-Sierra.