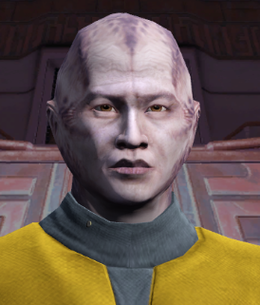 Formerly Ensign Harry Kim until his death in 2372, Keten is a Kobali reborn in 2410.

During Voyager's second year in the Delta Quadrant, the ship and its crew were duplicated by a subspace divergence field. While the two crews tried to save both ships, one Captain Janeway ultimately decided to sacrifice her ship so that other one may survive. However, Ensign Kim was killed in a hull breach prior to this, and was replaced by the duplicate Harry, along with the duplicate Naomi Wildman.

The Kobali, with the assistance of Jhet'leya, another former Voyager crew member once known as Lyndsay Ballard, found Ensign Kim's body in space. The Kobali kept Kim's body in a Vaadwaur stasis chamber for years while they prepared it for the rebirth process, and eventually used it to create Keten.