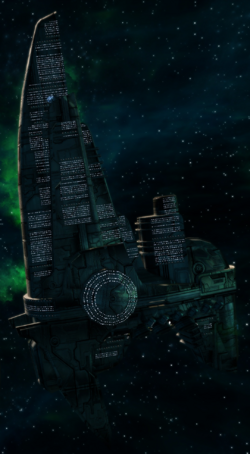 The Kentari Union is the official state of the Kentari people.

Schism within population and the Great Exodus[edit | edit source]

Kentari and Lukari were once all one people, originating from the planet Kentar, located in the Huranzi System. They were obsessed with power and material wealth and the pursuit of this was destroying the people and the planet.

The scholar Lukar and his followers argued against the ways of the rest of the populace, which led to a schism in their society between the Kentari and Lukar’s followers, the Lukari. In the civil war which ensued, Lukari lost and left the planet, choosing self-imposed exile over death or imprisonment. This event became known to Lukari as The Great Exodus. The Lukari struck most of their records of Kentar, including its location, and they would not revisit it or its people until 2410. ( “Of Signs and Portents”)

In the years that followed, Kentar was rendered incapable of supporting life due to increased pollution. Kentari attempted to terraform one of the planet's moons, Kaalat, but failed, leaving the moon a barren wasteland.

With no other options left, Kentari were forced to abandon the homeworld leaving behind incredible levels of radiation, atmospheric pollution, and ruins of great cities. ( “Of Signs and Portents”)

By 2410, the Kentari had moved to a new homeworld, known as New Kentar. They hid the planet from the rest of the galaxy by creating an artificial nebula.

As a result of economic decline, Kentari society became highly polarized and the idea of cooperating with outsiders was controversial. Prime Minister Tuulemaan thought the situation was desperate enough to consider dialogue with the Alliance and the Lukari Concordium. ( “Mirrors and Smoke”)

During first contact with the Alliance, Tzenkethi Coalition launched a protomatter attack on the Kentari moon, wiping out their agricultural base. The Lukari offered to use their expertise to restore the planet’s biosphere, but Kentari traditionalists attempted to sabotage them. The Traditionalist faction, led by Pentaaro, viewed the arrival of the Alliance and the Tzenkethi attack as a coordinated plan to weaken the Kentari, and attacked the Alliance delegation. The Alliance, Lukari, and loyal Kentari defeated the Traditionalist forces and diplomatic relations were established between three factions. ( “Mirrors and Smoke”)

Kentari and Lukari eventually established a joint colony in the Dranuur System - a first step to possible reunification of the two species. ( “Melting Pot”) 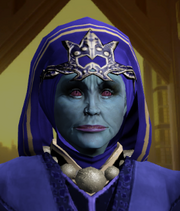 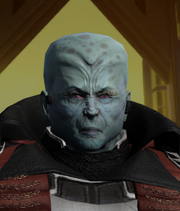 The Kentari Union is led by a Prime Minister. During their first contact with the Alliance, the office was held by Tuulemaan. The Prime Minister is based in the Kentari Capitol Building, one of a few buildings taller than the smog level. In comparison with the rest of the city, the building seems opulent.

Amongst the ministers in the Kentari government is the Minister of Defense who is responsible for planetary security and evaluation of both foreign and domestic potential threats. Up to the contact with the Alliance this position was held by Pentaaro, but following his mutiny, which resulted in a firefight between two factions in the planet's orbit, he was likely removed.

Economic decline has split people into two main political factions: Reformists, who back Tuulemaan, and Traditionalists (Trads), who back Pentaaro. While the Reformists are interested in addressing environmental problems on New Kentar and are more open to outsiders, Traditionalists deny any link between the smog and health problems and are highly xenophobic. ( “Mirrors and Smoke”)

Most of the Kentari are highly xenophobic and still harbor enmity toward the Lukari. During first contact with Alliance, Kentari ships opened fire when hailed by a Lukari vessel. Rogue elements of Kentari military attempted to lynch the Alliance-Lukari delegation in the city, a few hundred meters from the Capitol Building.

Traditionalists in particular view the Lukari as “Dangerous anarchists from [their] distant past … now returned and more dangerous than ever.” Meanwhile, members of the Alliance are seen as “well-armed aliens” and “hostile invaders.”

While the Kentari had to abandon their homeworld because of high levels of pollution, they maintained their damaging environmental policies on their new homeworld.

Unregulated exhaust systems resulted in high levels of chemical emissions in the air with a large number of citizens having fatal levels of toxins in their lungs. As a measure of safety, respirators are sold to citizens and most buildings have filters installed in doors, which are supposed to protect against the toxins. Lukari Captain Kuumaarke deemed the quality of these filters to be insufficient to protect the people. ( “Mirrors and Smoke”)

New Kentar’s lunar colony was the primary source of food for the Kentari population. The Kentari Prime Minister was attempting to increase production and jobs on the moon prior to the Tzenkethi attack. Thousands of workers were stationed on the moon when Tzenkethi obliterated all life on it.

Up to 2410 the main power generation on New Kentar was chemical and atomic. However Haardenite, a new mineral discovered by the Kentar Energy Consortium in asteroids, is considered a high-energy alternative. ( “Mirrors and Smoke”)

Wealthier elements of the society have shown a strong desire to further extend already existing tower blocks above the smog level. Independent analysis has raised concerns over possible problems with structural integrity if extensions continue.

However, traditionalist news media highlighted that as the wealthy move up to new floors, this gives poorer an opportunity to move into the homes vacated by the rich. ( “Mirrors and Smoke”)

In 2410, media was highly polarized with two media outlets in particular giving highly differing accounts of the situation on New Kentar and supporting the rival government factions. The Kentari Voice backed the Reformists, while The Solid Foundation backed the Traditionalists. ( “Mirrors and Smoke”)

Famous sportsmen on New Kentar include Yitnaan Roon, who bought gold plated breathers for his team’s fans, and Boraanu “The Beast” Moodi who spoke out against poor living conditions of his team’s players. Due to Moodi’s claims, a boycott against his souvenirs was in motion during the player's visit. Other players have made statements counter to Moodi's, but it is implied they were bribed to do so. ( “Mirrors and Smoke”)

Compared to the members of the Alliance, Kentari technology can be considered outdated. Their starships do not represent much of a threat to an Alliance officer. Ground forces encountered by the Lukari and Alliance representatives were rogue elements of the official Kentari military who backed Pentaaro.