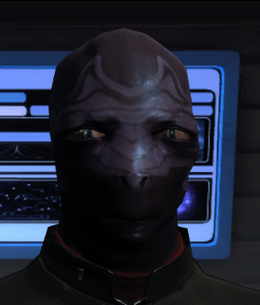 Lieutenant Kalapo is a Starfleet officer stationed at Deep Space K-7. Before joining Starfleet, Kalapo grew up on trading vessels, and he likes the stability of being stationed on a starbase.

Kalapo works on prototypes of new equipment for Starfleet, and the work that he does is kept very secure. He was involved in the testing of the Synchronic Distortion Prototype Rifle, and recommended against sending it to field testing; however, he was willing to adapt one for use against the Devidians.

While he is familiar with Franklin Drake, he does not appear to be aware of Section 31, instead believing Drake to be a military strategist. He provides Drake with updates regarding the research conducted on Deep Space K-7.