The K.I.V. Annorax (originally K.I.S. Annorax) is a Krenim temporal warship. The vessel is armed with a superweapon capable of erasing the target from the space-time continuum, creating an alternate timeline in which the target never existed.

The vessel was designed by a Krenim scientist named Annorax in the 22nd Century. He sought to restore the Krenim Imperium to glory by erasing the Rilnar species from history, but in his haste he accidentally decimated the Krenim and erased his wife from the timeline. Over the next two hundred years he attempted to correct his mistakes, erasing one species after another, before finally being defeated by an alternate U.S.S. Voyager. Annorax's vessel accidentally erased itself from the timestream during the battle, undoing all the damage it had wrought. In the new, restored history, Annorax abandoned his work to spend more time with his wife; however, the Krenim maintained a record of his work. (Star Trek Voyager: Year of Hell) 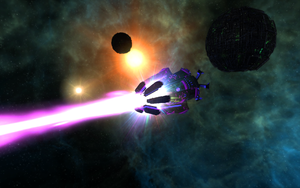 Being pursued by the Borg, the Annorax fires its weapon on a Borg transwarp gate. 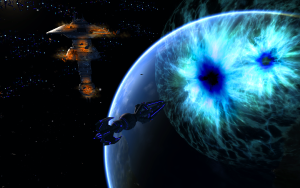