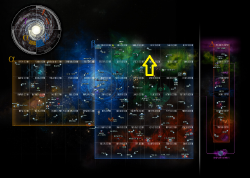 The K'shan System is a system located in the Lirss Sector of the Beta Quadrant.

An M-Class world orbiting a Class-B dwarf star, K'shan is claimed by the Romulan Star Empire. It has a diameter of 13,047 km and has a nitrogen-oxygen atmosphere. It is surrounded with a band of icy asteroids known as the "Shards."

According to Romulan legend, the colony ships which left Vulcan during the Sundering used the Shards as shelter during a series of ion storms.