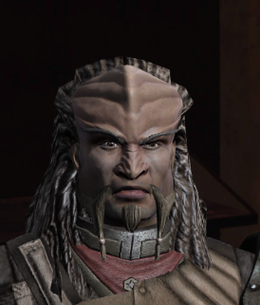 Lieutenant K'Valk is a KDF officer, loyal to the House of B'vat. By 2409, he serves as first officer of the I.K.S. Targ, a B'rel Bird-of-Prey.

When K'Valk sets his shuttle to a collision course on the Doomsday Machine, he starts to sing a Klingon war song.

"The blood of battle washes clean."

"The Warrior brave and true."

"Our lives burn short and bright."

"Then we die with honor and join our"

"fathers in the Black Fleet where we"

"battle forever, battling on through"