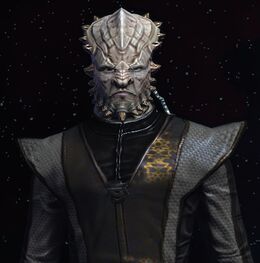 The Jem'Hadar Tactical Officer Candidate is a Very Rare male Jem'Hadar tactical bridge officer (presumably defected from Kar'ukan's rogue Jem'Hadars captured during the mission) unique reward for completion of the mission “Facility 4028”. Depending on the player's faction the candidate is either a Starfleet Ensign or KDF Warrior.

This officer is not customizable like standard bridge officers; body type, facial characteristics, nor uniforms can be changed.