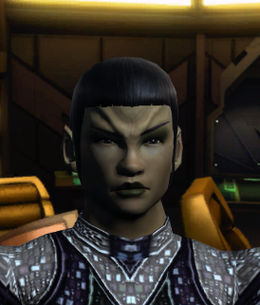 Commander Janek is a Romulan Commander serving the Tal Shiar in 2409. In that year she is assigned to Listening Post Hephaestus under Colonel Hakeev. She also acts as a mission giver for Romulan Republic players posing as Tal Shiar operatives during the "In Shadows" story missions.

She either survives or perishes, depending on the player's skills and choices. Her fate is unknown if she survives the encounter with the player, though she voices concerns of being subsequently executed by Hakeev.