First of the Intel starships developed by Starfleet and KDF for Operation: Delta Rising. 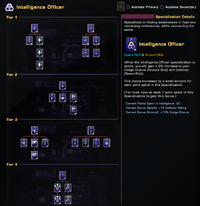 Specializes in finding weaknesses in foes and remaining undetected, while countering the same.

The Intelligence Officer Specialization is a Primary Captain Specialization released with Delta Rising. Captains trained in this specialization are skilled at locating and undermining weaknesses in their foes, while simultaneously covering their own susceptibilities from enemy detection. They also specialize in Stealth tactics, and anticipating and exploiting tactical opportunities.

While the Intelligence Officer specialization is active, you will gain a 5% increase to your Dodge Chance (Ground Only) and Defense (Space Only).

The abilities used by Intelligence Specialists are thematically focused on undermining the effectiveness of enemies. The use of stealth and control abilities, coupled with a few other risky and inventive maneuvers, gives this specialization a unique feel that complements the existing Professions.

The following playable starships can be classified as Intelligence Starships:

All Intel ships are capable of deploying an Intel sensor drone with the Gather Intelligence ability.

Intel starships can deploy a sensor drone to gather intel on the targeted foe.

Once deployed, this sensor drone will scan your target until you disable it or the target is destroyed. The target of your Gather Intelligence ability will periodically receive a Penetrating Scan debuff that will stack. Once enough Penetrating Scans have stacked on your target they become Vulnerable for a short time.

While the target is Vulnerable, Intel ships can use one of the three Expose Vulnerability abilities on this target:

These powerful abilities find a critical weakness in the target starship and then allow you and your teammates to briefly exploit it. This comes in the form of a crippling debuff or control effect. After a target has been afflicted by an Expose Vulnerability effect, the affected foe quickly compensates for its discovered weakness and thus become immune to Penetrating Scan debuffs for a short period of time.

All Intel ships also come with a built-in Warp Signature Masking which gives them a stealth bonus, rendering them undetectable from long range.

All Intelligence Starships, except for the Son'a Intel Battlecruiser, feature some form of cloaking device.

A large number of playable Tier 6 starships come with either an Ensign, Lieutenant or Lieutenant Commander Intelligence BOff seating. However, these ships lack the built-in Active Sensor Arrays, and are thus not considered to be Intelligence Starships.