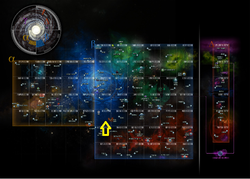 The Imaga System is a system located in the Risa Sector of the Beta Quadrant.

Imaga was once a troubled world plagued by tribal warfare. The conflicts came to a head in the late 22nd century, when an attack on a colony located on Imaga II cracked the planet to its core and killed more than 250,000 residents.

Shaken by the tragedy, the Imagans settled their differences and built a pacifist society. Imaga was occupied by Son'a forces in the late 2360s, but they were forced to retreat from the planet a decade later.