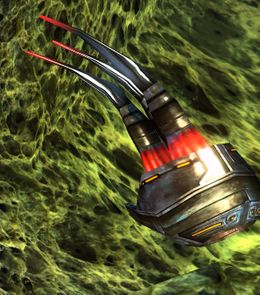 This page is for the NPCs within Operation Gamma. For other uses, see Swarmer (disambiguation).

Idran Swarmers are cosmozoan creatures native to the Idran System. As the name suggests, they live in large groups. They are hostile when disturbed. Swarmers are armed with a single plasma beam weapon.

Swarmers live in and around the Idran debris field between Idran I and Idran II. The former planetoid turned into a maze of hollowed asteroids. Several Swarmer groups occupy several asteroids and often swivel around the larger Idran Haulers. 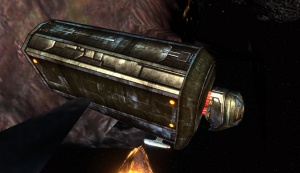 Idran Swarmers resemble tadpoles. The Swarmer consists of a triangular head from which three appendages protrude. An eye-like organ makes up the "face" of the creatures. The tip of the tail, the point of connection between appendages and head and the "eye" are red and bioluminescent. The skin has a metallic texture and is dark grey. There are also gold highlights along the body. When firing, these emit a red plasma beam, the Mining Laser.

The Idran Hauler takes a special role within the creature's hierarchy. The appearance is that of a regular Swarmer seemingly emerging from a large rectangular cargo container. Only the head protrudes from the "cargo hold", which has a distinct metallic texture and four blinking yellow lights on either side.

The Idran Swarmers probably use their Mining Laser to feed on the planetary remains in the system. The Hauler's body may indeed serve as a cargo hold or hatchery. Skin coloration and texture suggests that the Idran creatures may be artificial lifeforms.

Compared to other cosmozoans like the Gekli and Crystalline Entity, the Swarmers are much smaller, about the size of a shuttle.

The Idran Swarmer does not display any special powers.