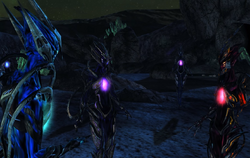 The surviving Iconians in 2410 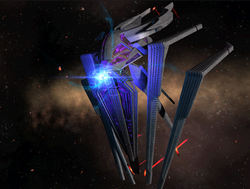 "They whisper in the night for chaos and despair, and Hakeev gives them blood as tribute. Our blood."

The Iconians (Borg designation: Species 29) are an ancient species from the planet Iconia in the Iconia Sector of the Beta Quadrant. With the help of their Heralds and gateways, the Iconians maintained a highly advanced galactic civilization they called "The Whole". Approximately 200,000 years ago orbital bombardment by an alliance of envious species obliterated their homeworld and colonies, forcing the survivors into hiding and to adopt a militant attitude.

Origins and "The Whole"[edit | edit source]

While the Preservers call them the "first of their Children"[1], little is known about the origin of the Iconians and the beginning of their civilization. The ancient Guardian of Forever describes them as powerful, terrible, wise, selfish, wrathful, and proud; although some of these attributes likely refer to them after their homeworld was destroyed. Although their life-spans can reach thousands of years, the Iconians have always been few in number, but shared their homeworld with the Heralds, a lesser humanoid species, which they first used as beasts of burden and later genetically adapted to be their intelligent and self-aware servants and "pets". Despite this, the Iconians treated them with respect and referred to them as their friends and even "children". ( “City on the Edge of Never”, “Blood of the Ancients”, “Midnight”)

Around 200,000 years ago, procreation came to a factual halt and it had been more than a century that an Iconian was born. By that time the Iconians had formed an intense social connection called "The Whole" and maintained a galactic civilization, peacefully exploring the galaxy and interacting with numerous species, such as the Dinasians and Iccobar. All gathered knowledge was stored in a central archive called the World Heart, which was well protected as the Iconians firmly believed in not sharing superior technology with "lesser" species, who might use it to harm themselves or others. However, envy grew among other species, who formed an alliance in order to gain access to the superior knowledge by force. While the Iconians anticipated an attack and preemptively evacuated many of their people to colony worlds, the anti-Iconian alliance, which included the Iccobar, attacked every last Iconian world - beginning with the colony of Dewa III and hours later Iconia itself. With the help of "The Other", consisting of the time traveling player, Kagran, and Sela, twelve Iconians were able to evacuate using one of their gateways and sought shelter beneath the surface of Dewa III, where the indigenous population still loyally served them. The World Heart, however, was lost to both the Iconians and the lesser species, or so it was believed... (Last Days of the Dewans (lore), “Midnight”)

An ancient recording on Dewa III (New Romulus), depicting an Iconian and two Dewans in front of an Iconian gateway.

Traumatized by their experiences and unable to recreate their civilization without the World Heart, the surviving Iconians adopted a paranoid and militant attitude, with T'Ket as the most aggressive of the twelve. They turned the Heralds from mere servants into powerful soldiers, and adopted further servitor races, such as the Elachi and the Solanae. As Dewa III had also been obliterated by the anti-Iconian alliance, the Iconians left and the Solanae constructed a massive Dyson Sphere as a staging base capable of traveling across vast distances through subspace. When the Solanae activated the Sphere, a large scale industrial accident occurred. The surviving Solanae were forced to migrate to subspace when their molecular structure was changed due to exposure to large amounts of tetryonic energy and the Iconians abandoned the Sphere due to its flaws. ( Last Days of the Dewans (lore), “Unsafe Practices”, “Midnight”, “House Pegh”) At some point, the Iconians also changed their humanoid appearance and became beings of energy, which also rendered them physiologically incapable of time travel. Due to this, as well as their new-found ruthlessness, it was passed down by the races that destroyed them that the Iconians had been "demons of air and darkness", traveling via Iconian gateways and ruling oppressively over their large empire. Captain Jean-Luc Picard of the U.S.S. Enterprise-D once speculated that this might be historical revisionism by the victorious powers, an assumption that would later prove correct. In time, the Iconians retreated from the galaxy to the Andromeda Dyson Sphere, and they as well as their homeworld became nothing but a myth. ( “Frozen”, “Surface Tension”, “What's Left Behind”) 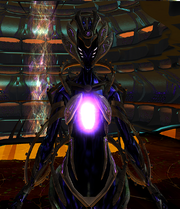 M'Tara, after the Iconians had changed to become beings of pure energy

In 2365, the U.S.S. Yamato discovered an ancient Iconian device during archaeological digs on Denius III, revealing the long lost location of Iconia in what by then had become the Romulan Neutral Zone. After arriving at Iconia, however, the Yamato fell victim to an unmanned Iconian Probe that transmitted a piece of Iconian software to rewrite the ship's computer systems and ultimately causing a warp core breach. To prevent a war with the Romulan Star Empire, who claimed the planet for themselves, as well as the Iconian technology from falling into the hands of then-Commander Taris of the I.R.W. Haakona, Captain Picard destroyed what was believed to be the only remaining outpost on the planet's surface. ( “Taris”, TNG - "Contagion")

A second Iconian base was found on Vandros IV in the Gamma Quadrant by the Dominion in 2372. There, a group of renegade Jem'Hadar took over the facility and attempted to use its Gateway to stage a rebellion against the Dominion. A Starfleet/Dominion joint operation commanded by Cpt. Benjamin Sisko and Lt. Cmdr. Worf destroyed the base. (DS9 - "To the Death")

Despite their apparent absence from the Milky Way, however, the Iconians' desire for vengeance remained unchanged. Already in the 22nd Century, they used the Elachi to gather intelligence on the Humans. In the late 24th and early 25th centuries, they used the Solanae to abduct and study Humans as well as other Alpha/Beta Quadrant species and began to secretly manipulate species of the galaxy in order to prepare for an eventual invasion. Although an initial attempt to infiltrate Starfleet Command with bio-engineered neural parasites was thwarted by the crew of the Enterprise-D, later incursions were more successful. By faking intrusions of Alpha and Beta Quadrant ships into fluidic space, the Iconians pushed the Undine into an aggressive position against the Federation and the Klingon Empire amongst others, causing several conflicts such as the Klingon-Gorn War and the Federation-Klingon War. Their biggest subversion, however, was to deceive Taris of the Romulan Star Empire and even manipulating one of her officers, Hakeev, into causing the Hobus supernova, which destroyed Romulus and Remus in 2387. (ENT - "Silent Enemy", TNG - "Conspiracy", TNG - "Schisms", “Taris”, “Fluid Dynamics”)

An Iconian gateway beneath the surface of Iconia

The twelve last surviving Iconians on the surface of the Kyana moon. 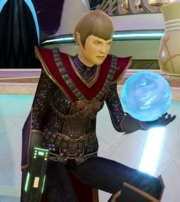 Sela, holding the World Heart after the last twelve Iconians fled their homeworld 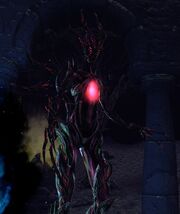 With the end of the Iconian War, and the division between T'Ket and the other surviving Iconians, the current status of the servitor races - including whom any given servitor race may now be aligned with, T'Ket or The Whole - is unknown, although at least some Heralds continue to fight for T'Ket.

The Iconians' military force is made up of Herald servants who operate their advanced starships and fight their enemies on the ground. 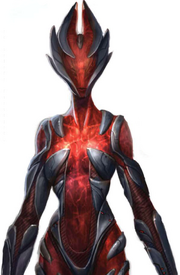