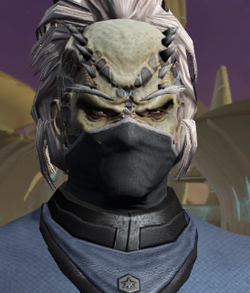 The Iccobar were a warp-capable humanoid race who maintained relations with the Iconian civilization approximately 200,000 years ago. They were extinct by the 24th Century, but Federation scientists studied their language, identifying it to be similar to that of the Iconians, Dinasians, and Dewans.

The Iccobar had a warlike culture, conquering and enslaving numerous worlds throughout the galaxy. Coveting the Iconian civilization's gateway technology, they led an alliance of envious races such as the Dinasians in an invasion of the Iconian empire, bombing Iconia and many other colonies into dead rocks. ( “Midnight”)