Holo Emitter - Model CH-12703 Space Transport is a Starship device that will change the outward appearance of your starship.
This Ferengi-manufactured device will mask your ship's appearance with a holographic overlay - for a limited amount of time, of course. 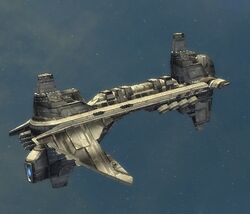 This item is not bound and can be traded, mailed, sold or purchased from the Exchange.

The Holo Emitter works both in Sector Space and in planetary systems.
Holo Emitter - Model CH-12703 Space Transport can be used for 60 minutes.
This item can be activated or deactivated by selecting "Use" or double-click on the item from your inventory items.
Cannot be equipped as ship device and the timer is not displayed on the UI.
If deactivated, the 60 minute counter pauses, and resumes when the device is reactivated.
If the player beams down on the ground, the counter pauses and when beaming up back to space the ship will have the default appearance.
After 60 minutes of use is accumulated, the device vanishes from inventory.

This item can be used by all factions. Ship Holo Emitters change only the appearance of a ship and do not affect the abilities, powers or effectiveness of the ship.