History of the Romulan and Reman peoples

The following covers a history of the Romulan and Reman peoples within the timeline of Star Trek Online, the immediately preceding years and times references in the game's lore.

Emblem of the Romulan Star Empire. 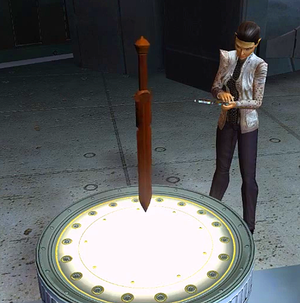 The Sword of the Raptor Star, left on Dewa III

The Romulans began as a group of Vulcans who were referenced as "those who march beneath the Raptor's wings" during the violent Time of Awakening, also called "the Sundering" by the Romulans. As they kept refusing to accept the Vulcan philosopher Surak's teachings of complete suppression of emotions, they split off from Vulcan society and left the planet in the 4th century, taking with them revered artefacts like the Sword of the Raptor Star.

Traveling among the stars in huge generational ships, the outcast Vulcans created several off-shoot civlizations, e.g., the Debrune, by settling on various planets including Barradas III. Before or after this, the proto-Romulans reached Dewa III, which they named "Vastam". Some desired to settle there, not wanting to return to the cold and cramped ships, while others believed they could not make the necessary changes to live there. Eventually an open debate was organized to make the decision. Despite the good intentions, things quickly deteriorated and a massive riot began. By the time it ended, 247 people had been killed. The survivors unanimously decided to leave and ultimately settled on the planets Romulus and Remus in the Romulus System.

Remus was a tidally locked world with the population forever living in darkness. Its mineral wealth meant it was of critical importance to the empire and the Reman population became the worker caste of the Empire.

In the 22nd century the Romulans made first contact with Earth when Romulan ships encountered the Enterprise. By this era the Romulans were already highly secretive and revealed very little of themselves to outsiders. Romulans maintained their security by ensuring division among their potential enemies, but the arrival of Earth as a peacemaker between the Vulcans, Andorians, and Tellarites. The Romulans attempted to destabilize the region but the deception was exposed and the four powers formed a Coalition of Planets to protect themselves.

Tensions between the Romulans and Earth's Coalition led to war. The Romulans lost and the Neutral Zone was established over subspace radio, permanently separating the emerging United Federation of Planets from the Romulan Star Empire.

After a century of isolation, the Empire re-entered galactic politics by destroying 4 Federation Neutral Zone outposts in 2266; the attacking ship is eventually defeated by the U.S.S. Enterprise. Shortly after the Romulans and Klingons sign the terms of an alliance, resulting in the Klingons gaining access to cloaking technology, while the Romulans take delivery of several Klingon-designed vessels. 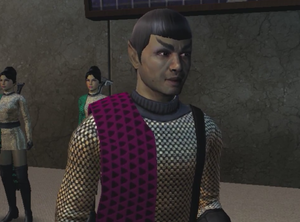 Looking for an advantage, Romulan Commander Chulak accepts an offer from the Na'kuhl to provide them with a Planet Killer. After an intervention from future temporal agents, they lose control of the Planet Killer and it renders Galorndon Core uninhabitable before being destroyed. Chulak cuts ties with the Na'kuhl after this event. ( “The Core of the Matter”)

The Klingon-Romulan alliance collapses shortly before the Khitomer Accords are signed in 2293. The Romulan Ambassador to the Federation had been party to an interstellar conspiracy to bring about a Federation-Klingon war in place of Chancellor Gorkon's proposed peace talks. A few years later, the Tomed Incident led to the Federation agreeing not to use cloaking technology and the Romulans entered a period of isolation.

Despite the Romulans avoiding the Federation, they had no qualms about attacking the Klingons. In 2344, Romulan forces attacked the Klingon outpost at Narendra III, which was defended by the U.S.S. Enterprise-C. The crew of the Enterprise was captured, among them Natasha Yar. Her daughter with a Romulan general, Sela, would later serve in the Romulan military. 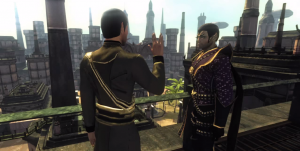 The Romulan's isolation from the Federation ended in 2364 when a ship sent to investigate destruction of Romulan monitoring stations on their side of the Neutral Zone (later revealed to be the work of the Borg Collective) makes contact with the U.S.S. Enterprise-D. The Empire subsequently tried to destroy the Federation/Klingon alliance on several occasions in the 2360s.

In 2368 Ambassador Spock travelled to Romulus to work with Romulan reunificationists, those who desire a peaceful union of Romulan and Vulcan peoples. Among those he tutors is a young D'Tan.

In 2371 the Romulan's intelligence service, the Tal Shiar, cooperated with the Cardassian Obsidian Order in a preemptive strike on the Founders' Homeworld. However the operation was a trap intended to remove the Romulans and Cardassians as serious obstacles to the Dominion. The Empire recoilled from engaging the Dominion again and signed a non-agression pact. Only after being tricked into believing a Dominion invasion of Romulan space was imminent, the Empire joined Starfleet and the Klingon Defense Force in the Dominion War. Reman troops were used as assault forces during the most violent encounters of the Dominion War. 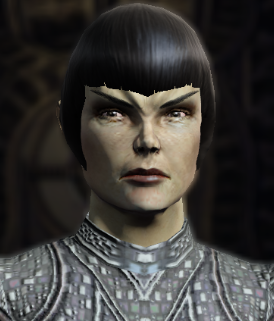 After the war, in 2379, the Romulan Senate was overthrown by a Reman military coup led by Shinzon, a clone of Jean-Luc Picard; and backed by several Romulans including Senator Tal'aura and Commander Donatra.

Their victory was largely due to their use of thalaron weapons. Following the coup, Shinzon attempted to exterminate all life on Earth using a Cascading Biogenic Pulse weapon on his flagship, the I.R.W. Scimitar. He was defeated in the Battle of the Bassen Rift by the U.S.S. Enterprise (NCC-1701-E), the Romulan warbird I.R.W. Valdore (commanded by Donatra, who had changed her mind about supporting Shinzon), and another Mogai Escort. (Star Trek: Nemesis)

Backed by Commander Tomalak, Senator Tal'aura proclaims herself to be the new Romulan Praetor. Tal'aura clashes with Commander Donatra who takes over several agricultural worlds and declares herself Empress of the Imperial Romulan State.

During this, Reman General Xiomek of the Reman Kepeszuk Battalion allied with Spock's Unification movement on Romulus, seeing them as yet another population exploited by the Romulans. Unlike the Unification movement, however, the Remans wished to win their freedom through a military solution rather than nonviolence. The Remans demanded a world where they could live independent of the Empire. Tal'aura - now a Praetor - refused, and blockaded Remus instead. This resulted in several skirmishes in 2381, none of which were consequential. The following year the Remans petitioned for representation in the Romulan Senate, but Tal'aura ignored the request.

In the same year, The Klingons seize the chance to retake Khitomer and invade Romulan space.

In 2383 Tal'aura reshapes the Romulan Senate and appoints Senators to foster her power, to the disadvantage of the noble houses. Famine ravages Romulus in 2383 and Tal'aura puts down riots with brutal force. Fleet Commander and proconsul Tomalak is tasked with retaking the worlds from Donatra. He appoints Taris to be his Admiral and second-in-command.

Sela follows Tomalak as proconsul, who is retired after losing a power struggle to her in 2384. To resolve the conflict between the two Romulan states, Donatra appoints Taris as a representative and sends her to Romulus. Tal'aura is assassinated and Sela publicly blames the Remans and the Unification movement: "The blood of one praetor was not enough for the Remans. Tal'aura was the victim of their thirst for destruction."

In 2385 Sela fosters her power by replacing Senators appointed by Tal'aura with noble house members. Donatra, Sela and the head of the Tal Shiar Rehaek agree on a reform of the Continuing Committee, sharing the power in the Empire. Chulan becomes the new Praetor. The Imperial Romulan State is dissolved and assimilated back into the Star Empire.

In the same year, Donatra offers the Reman leader Xiomek citizenship to all Remans and representation on the Senate in exchange for their support. Against objection by Sela, popular opinion and the Senate, Donatra and Xiomek succeed with the reform. The Remans accepted, adding to Donatra's formidable military strength and giving her the resources to reopen shipyards and munitions plants closed since Shinzon's revolt.

In 2386, it was found that Remus could no longer be mined without risking a Praxis-like disaster. The Romulans, rejecting Xiomek's request for a continent on Romulus, instead offered Crateris to the Remans to be their new homeworld, which the Remans accepted.

The Tal Shiar claims to have evidence that the noble houses are responsible for the murder of Tal'aura, but refuses to show the evidence to either Donatra or Sela. Open conflict emerges between Sela and Raheak, while Donatra remains neutral. In the escalating conflict, Sela is sentenced to death, but Donatra manages to convert the sentence into permanent exile. The following year, Sela leaves Romulus with a small fleet of loyal followers. 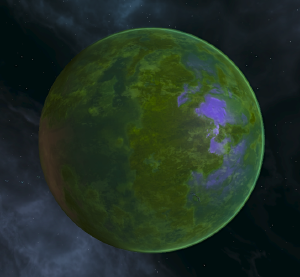 The Hobus supernova event in 2387 has an devastating effect on the Empire, killing billions and destroying many core worlds, among them Romulus and Remus. Xiomek had earlier invited Donatra to see the new colony on Crateris. During her return, the Hobus star went supernova and Donatra, Xiomek, and the Valdore were all reported missing in the aftermath.

In the immediate aftermath, the mining ship Narada is upgraded with Borg technology to defend the beaten Empire. After destroying a Klingon fleet it vanished in the black hole, created by Ambassador Spock to contain the Hobus supernova.

In 2388, Taris rises to become the new leader of the Empire. The new capital Rihan on Rator III is founded in 2392. The first institution to be created is the Romulan Colonial Organization Committee (RCOC). The RCOC reinstates the Romulan Senate in favor of a monarchy in the new Romulan constitution. Taris becomes the first Praetor in 2394. 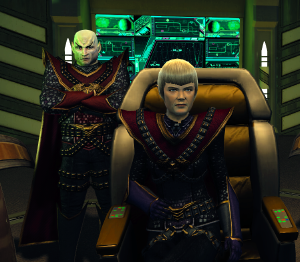 When a Bloodfire epidemic strikes on Kevratas in 2396, Taris orders a strict quarantine and cut the planet off any supplies during the winter season.

In 2397 Kevratas declare independence. Tebok refuses to put down the movement by force as ordered by Taris. Instead he allows the leaders safe passage to be heard in front of the Senate. Taris tries to remove him from the office as the head of military, but is overruled by the Senators.

After a two year power struggle, the I.R.W. Alth'lndor, Tebok's flagship, is destroyed as the result of a computer virus infection. Taris enters into an open power struggle with the Senate which is trying to further restrict her constitutional powers.

Sela and Velal, Tebok's successor and student, conspire to overthrow Taris in 2401. The Empire stands on the edge of civil war, when Velal's and Taris's forces engage in several skirmishes.

Taris suddenly disappears from Rator III in 2403. Backed by the presence of dozens of warships in orbit, Velal and Sela approach the Senate. Sela becomes the new Romulan Praetor, Velal the new head of military. In the following years, Sela manages to reshape the Empire. In 2408 she is crowned Empress of the Romulan Star Empire in Rihan on Rator III.

In early 2409, Crateris and other Reman-inhabited colonies, e.g., Delta Corvi, are attacked and destroyed by the Tal Shiar and their Elachi allies. Many Remans are able to flee and band together under Guard Captain Obisek to establish a resistance base on Dera IV. After the base is attacked and destroyed by the Tal Shiar, Obisek and his followers claim the The Vault in the Haakona System in order to start a full-on resistance movement against Empress Sela's Romulan Star Empire and the Tal Shiar in particular. 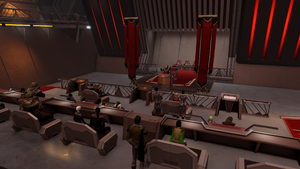