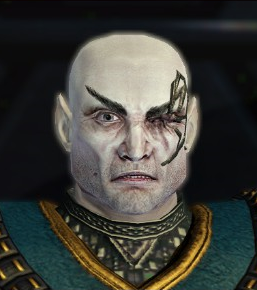 Colonel Hakeev (Officer ID 112K35) is a Colonel in the Romulan Star Empire. He is in charge of the Tal Shiar, and Empress Sela's second-in-command.

Hakeev values hierarchy and has the opinion that the Romulans are the rightful master race of the Remans, who he calls "beasts of burden". He is also of the opinion that the Tal Shiar are all that remains of the Star Empire, as its people are scattered and the Empress values nothing but her own power.

In 2365, Hakeev served under Subcommander Taris on the I.R.W. Haakona and participated in a mission to locate Iconia. Although no Iconian artifacts could be retrieved, they were able to locate the planet and their experiences led Hakeev and Taris to devote their lives to studying the Iconians and their technology. When they eventually made contact with servants of the Iconians, the Elachi, they refused to communicate with anyone except for Hakeev. Obsessed with bringing about the second coming of the Iconians, Hakeev lied to Taris and the rest of the Tal Shiar while doing the Elachi's bidding. In an effort to directly contact the Iconians that involved the use of decalithium and protomatter, he eventually caused the Hobus supernova in 2387, destroying Romulus and Remus.

As of 2409, Colonel Hakeev, amongst others, commands Tal Shiar Listening Post Hephaestus at the Hfihar Mining Facility, where he and Commander Janek are often at odds with each other. Romulan Analysts also keep a close watch on him, noting that he recently took a two-day-trip with a shuttle into the Neutral Zone, and also sent six encrypted messages to an unknown recipient. 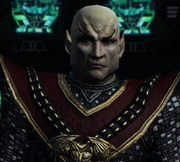 Hakeev before losing his eye. 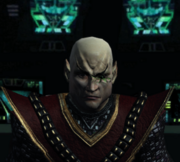