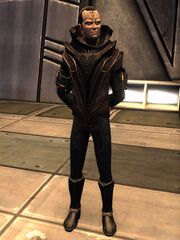 Gul is a rank in the Cardassian military held by commanding officers, roughly equivalent to Captain. While the Gul is high ranking, it lacks any significant special abilities, making it simply a stronger version of the Gil and Glinn.

The Gul's uniform is heavily armored compared to that of its subordinates, and has a more brown color than the traditional gray.