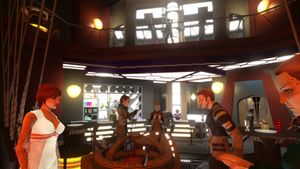 Deep Space 9 is a major cross-faction hub in the Alpha Quadrant.

A hub or social zone is a non-mission map where players can gather to access services, buy from vendors begin missions and interact with each other. Hubs do not include combat and rarely include missions outside of tutorials.

Adventure zones and battle zones, which serve as large maps for assorted missions and combat, occasionally include a separate hub map, or a small dedicated area with basic hub functions such as bank.

Players encounter new hubs are they progress through the storyline; for instance Delta Quadrant Command serves as a base during the Delta Quadrant arc. In some rare cases, hubs become inaccessible; namely the 23rd century ESD and Starfleet Academy.

Some are faction locked, such as Deep Space K-7 which is not accessible to KDF-aligned characters. Each faction has a primary faction-locked starting hub, usually, their homeworld, although Romulan Republic and Dominion characters can access the faction hubs of their allies.

All hubs have access to Mail, Exchange, Bank, Account Bank and Fleet bank, but there are wide differences in what actions can be performed or currencies can be used. Beyond that, access to services such as the shipyard or Dabo can vary widely.

For specific vendor list including location, either click the starbase at top or action/currency at left. Additionally, there is a list of vendors in all locations.

In instances where the actions or currency are used, but only for limited circumstances, see footnotes for more information. To see the relevant NPC, hover over the check mark.

All these hubs have a bank but have only few or no special functions. Many of them are small areas within a broader adventure zone.