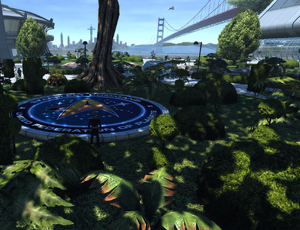 Welcome to the beginner's Basics Guide, the first of many guides for players of Star Trek Online (STO). This guide shall serve as a launching pad for all players who are new to the game or just want to know more about the basics of STO. 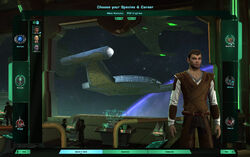 On the character creation screen you can choose your faction & race (left) as well as your career path (right).

The game is centred around your player character. Character creations with you choosing your faction, career path and race which combined determine certain elements of your characters appearance, abilities and story.

Traits are mostly passive bonuses that can be activated by assigning them to slots. Picking your race (or choosing to create your own custom race) automatically means picking one specific non-customizable racial trait (or creating one for your custom alien). Also, three additional race-typical traits are assigned to each preset race, however, these can be customized once you are in-game (see image on the right). As you level your character up, two additional personal trait slots (1 space, 1 ground) become available every 10 levels, so each player has a total of 18 (9 ground, 9 space) customizable personal traits and one fixed racial trait at level 60 (the Reputation System grants further traits from level 50 onwards; more information on the trait-article).

Your character progresses through different levels by accumulating Experience Points, just like many other MMORPGs. However, each bracket of 10 levels also comprises a rank (Ensign & Lieutenant counted as one rank). At each level, a character gains rewards and Skill Points (explained below). Furthermore, new tiers of starships are opened up to each new rank.

Note: Additionally and independently from your military rank you can gain commendation ranks as part of the Duty officer system.

Abilities are the actions that you and your bridge officers can take in combat. There are both space and ground abilities. You gain access to abilities in various ways: 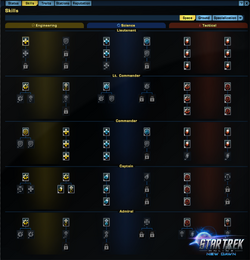 Skills in Star Trek Online are comparable to "talents" in other games and are distributed as your character gains skill points while leveling up.

Skills (comparable to "talents" in other games) are unlocked at level 5 and increase the effectiveness of abilities and/or improve certain base stats, e.g., critical hit chance or hit points.

Skills are separated into two major groups: Space & Ground. Space skills are subgrouped into "Tactical", "Engineering ", and "Science"; ground skills into "Weapon", "Health and Armor", "Personal Shields", and "Kit". Every player, regardless of the career path, can access any skill.

At level 50, the skill system is maxed out and players begin to earn points that can be spent in the Captain Specialization system. This is a very similar, talent tree-like system, but it is not capped at a certain maximum number of spent points, but instead allows players to keep earning specialization points indefinitely.

The user interface during ground combat

The user interface in sector space

The user interface (often simply referred to as UI) is the method by which information is presented to the player and the player interacts with the game itself. The design of the UI is now loosely based on the LCARS computer interface seen in the Star Trek shows and originally created by Mike Okuda. Although the general layout remains identical, each faction has its own design with a set of different color schemes available for all players.

This is a very basic guide to the initial controls of the game, both in flight and ground modes, and also a couple of "tricks" to help you along the way.

Please Note The following key mappings are true for the Windows English keyboard layout. Other OSes or language layouts may vary.

On the screen in either mode are controls for actions that your character can perform. In ground mode you will be shown your weapon's main action (normal "fire") and other possible actions such as "Exploit attacks". These each have a number to the top left of their control, and can be activated by pressing the corresponding key on your keyboard (1 through 0)

You can have up to four rows of controls on screen at any one time in both ground and space modes, to set these click the icon to the top right of the control module that looks like three stacked playing cards. This brings up a control that allows you to select between one and four rows of controls.

On the left hand end of these rows is a number between 1 and 10 with up and down arrows. These allow you to set up your own configurations and scroll between available controls.

These are the methods of using that control on the keyboard

Each Bridge officer has training in different capabilities allowing them to vastly change the basic setup of your ship, be it by adding extra power to your next phaser shot or healing your shields mid-combat.

The initial play setup gives you a row of icons below your main ability section, showing the face and abilities of each of your bridge officers. When you start the game each officer will only have one ability, but as you progress through the game the number and class of abilities increase (you can also train your officers either through your own abilities, additional bridge officers or at certain starbases).

These action icons will generally have "A" and a number in their action boxes. To control with the keyboard hold the ALT key and press the appropriate number.

Remember, when purchasing a new ship, set the bridge officers! Also you might try to remember to keep them as trained and as promoted as possible to increase their additional abilities.

The game has a funny habit of moving your controls around, especially when you gain new abilities, even as far as new weapons!

To stop your firing actions, heals, buffs and debuffs being all over the place you can move the controls around as you wish them to be. Just do this when not in a combat area to avoid some blushes and much muttering of "Where did my phasers go!?"

To move a control, drag it with the right mouse button from where it currently resides to your required location. This can be within or across action bar rows (see above). After you have your actions set up the way you want them, you can click a checkbox that locks your action bars to prevent your abilities from being moved around or from accidental removal altogether.

All of the key mappings and controls can be adjusted and moved around the screen using the controls in the option menu. To manually adjust the placement of monitor panels and controls, click the game options icon to the right of the minimap and select the top HUD option, then drag the corresponding green boxes to your convenience.

Luckily, they also have a reset function!