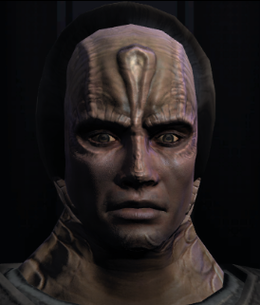 Gul Granspir is a Cardassian officer loyal to the True Way terrorist organisation.

He and his soldiers have taken control of the agricultural colony on Goralis III in order to control its production of meya lilies, a difficult to grow crop which can be used to produce medication for Yarim Fel syndrome. The colony's leader, Orra Val, has the disease, and Granspir uses his control over the medication to influence him.

Granspir's goal is for all Cardassians to be subservient to the True Way; as such, he allows the local farmers to continue producing the meye lilies so he can use them as a bargaining chip against the Cardassian government. He is also attempting to suppress knowledge of his control over the colony to prevent military intervention by the Cardassian Defense Force.

Granspir's forces built machinery in a network of caves beneath the colony, leading to contamination of the water table. This forced Orra Val to request the Federation's assistance.