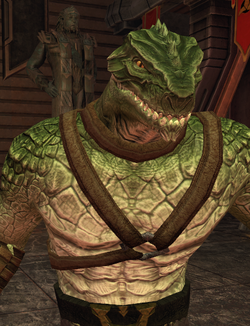 The Gorn are a cold-blooded reptilian race from the planet Gornar. In Star Trek Online they are a playable race and belong to the KDF faction. The Phalanx Science Vessel, Draguas Support Vessel and Varanus Fleet Support Vessel are the only playable Gorn ships in-game, though there are Gorn-style Zen Store costumes for the Vo'quv Carrier and Vor'cha Battle Cruiser.

The TOS-style Gorn options, which appear in “In the Shadow of Cestus”, unlock for all Gorn characters once a TOS character is leveled to the 25th century.

Gorn appearance is distinct given their reptilian similarities. They have slitted silvery eyes, sharp teeth, claws on their hands and scaled green rubbery skin.

Gorn are physically very strong and tall, much more so than typical humans. They are known to be very stubborn and territorial. In Star Trek Online they were originally the only race in the game that had the requirement of three mandatory traits, leaving the player to only be able to choose one. However that was changed and the three former traits were condensed into a single trait.