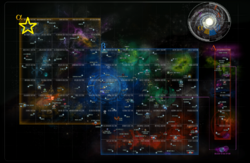 The Gon'Cra System (aka Tzenkethi Battlezone) is a space adventure zone located in the Gon'Cra Sector, on the edge of the explored space. Tzenkethi forces have set up new mining and construction operations in the orbit of Gon'Cra II, tasked with harvesting raw materials and turning them into weaponry.

General Rodek explains the main goal in the Tzenkethi Battlezone.

Welcome to Gon'Cra.
The Tzenkethi are operating in multiple locations within the system. Command has identified three enemy operations within these areas.
We need to regain control of each area. Review the briefings I have made for you to gain a better grasp of the challanges at hand. 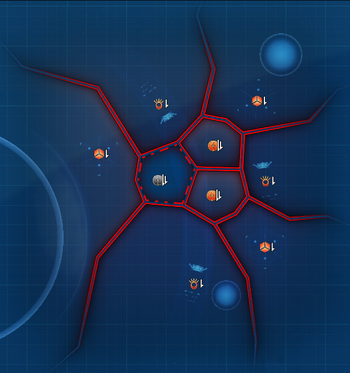 Available to players once they reach Level 60, the Tzenkethi Battlezone is divided into nine areas. Players are tasked with setting up blockades and countering the Tzenkethi construction projects by destroying their research data and denying them assets for their war machines. Efforts in the Battlezone are coordinated by the I.K.S. Kor.

King of the Hill[edit | edit source]

Once all nine points have been captured, the Alliance turns its attention to three Coalition Dreadnoughts protected by metaphasic shielding: Kan'Keli, Tak'Terak and Tzen'Korath.

If all three Dreadnoughts have been destroyed, the Alliance will take control of the system and the Coalition will be forced to retreat, giving players two minutes to prepare for the next round.

For each captured point, the highest reward players can receive is 10

Based on how many Tzen'tar Dreadnoughts are defeated, completing the Battlezone will reward the following:

Following accolades can be obtained in Tzenkethi Battlezone: