A Gekli in Fluidic Space

The Gekli, also known as The Great Ones, are a race of cosmozoan creatures, native to Fluidic Space.

The Federation made first contact with the Gekli in 2367. A pregnant member of the species was unintentionally killed by the Enterprise-D. Its offspring, nicknamed "Junior" attached itself to the Enterprise thinking of it as its mother and draining its energy. Ultimately the creature was "weaned" and left the ship, returning to several other members of its species.

It was not until further exploration of Fluidic Space was conducted in the 25th cenutry, that this unusual dimension was recognized as the home of the Gekli. They use landmasses in Fluidic Space as feeding grounds.

The Gekli share this place with their symbionts, the Hylasa, as well as the Undine, who seem to hunt and kill regularly. 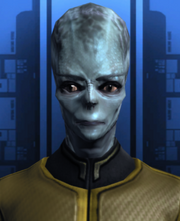 Similar to Joined Trill, the Gekli have symbionts in the form of the humanoid Hylasa. The Hylasa use the Gekli as means of transport, influencing their movement when bonded.

The Hylasa seem to revere the Gekli on an almost religious level. They also consider it their duty to protect them from harm, especially newborn Gekli who are not yet bonded and mostly defenseless.

A non-combat Gekli Companion Pet was made available for purchase on the Cryptic Store on 10/28/2011.