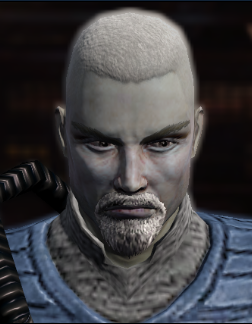 Gein is a maintenance hologram inhabiting the lower levels of Drozana Station.

Gein was sent to the lower levels by Belan to investigate strange power fluctuations and radiation leaks; according to his log entries, this proved to be a lengthy task. While in the lower levels, Gein made a number of upgrades, including the remote overrides for bleed valves on the environmental controls, holoemitters to expedite his mobility, and security overrides.

His log entries reveal that he believes the low-level radiation was beginning to affect the station's inhabitants, and that he believed they were showing signs of schizophrenia and paranoia; he vowed to refrain from contacting others until his work was complete, and activated a safety interlock on the emergency lift, preventing others from finding him. However, it is suggested that exposure to triolic radiation eventually degraded his program, driving him mad. In a log entry, Gein reveals he purged several subroutines which contained "program errors."