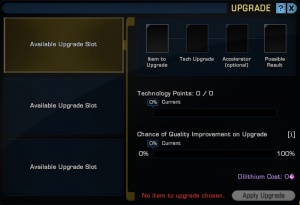 The Gear Upgrade window. The top bar indicates the accumulated tech points and the bottom one shows the "Quality Improvement Chance". The latter chance can be increased by using better (or special) Tech Upgrades or by using consumable boosts from the C-Store or from some special mission rewards.

The Gear Upgrade System enables players to improve the quality of their gear items by increasing both their mark and quality, i.e. rarity or "color". It was added to the game shortly before the release of Delta Rising and can be accessed through a button on the bottom-left of the inventory window, or via the right-click menu of upgradable items while they are not equipped.

To be upgraded, an item needs to accumulate Technology Points. Once these reach the required amount, the upgrade process can begin. Accumulating Tech Points requires dilithium

and Tech Upgrade tokens, which are obtained mainly through the R&D system and/or trade with other players/the exchange, but also as a reward from some missions.

The resource requirements for upgrading can sometimes be eased during events known as Upgrade Weekends. During these events, the amount of technology points added by a Tech Upgrade is doubled, which means you need less dilithium to achieve the same results.

to purchase or craft, but applying one does cost dilithium

Aside from their grade, there are also different types of Tech Upgrade Tokens. Most tokens, such as those crafted in the R&D System or some handed out during special events, work only on a specific "school", i.e. category, of items. (Enhanced) Universal Tech Upgrades on the other hand, are applicable to any item and are available as one-time mission rewards from “Reunion” and “Breaking the Wall”, as well as from a new story mission during promotion weeks after its initial release.

Accelerators are mainly obtained from the Research and Development Pack which can be purchased from the C-Store or as rewards from some special missions. They can also be sold and purchased on the exchange.

The upgrade process itself can be started once an item received the required amount of Tech Points from upgrade tokens. The process does not take any time and it does not require any additional resources. Additionally, the system provides three slots for upgrading up to three items at a time.

The gear upgrade process always results in an improved gear mark as long as the mark can be upgraded (i.e. up to Mk XV). Also note: Common Installed Shipboard Parts Cannot Be Upgraded. Additionally, there is a (typically small) chance that the upgrade process will improve the rarity of the gear (up to Epic). This chance is denoted by the Quality Improvement Chance bar on the upgrade window. It can be increased by using high-quality Tech Upgrades or by using the appropriate Upgrade Accelerators. Rarity improvement has varying effects on your gear. Many items will acquire an additional modifier. Others, like consoles, will instead gain a boost similar to the mark upgrade. The modifiers that can be achieved by rarity upgrades are however limited. Weapons may only gain [Acc], [Dmg], [CrtD] or [CrtH]. Some rarity upgrades will always yield the same modifier. Weapons, for example, will always gain [Ac/Dmg] when upgraded to epic. This is especially true for items belonging to gear sets. The corresponding information is found on the pages for the gear sets.