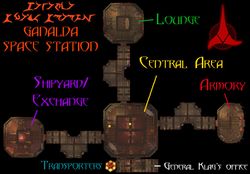 The Ganalda Space Station is an advanced facility orbiting a planet (presumably Ganalda IV) in the Ganalda System in the Archanis Sector. The station serves as a PvP hub for players of the Klingon Empire, and is thus comparable to Starfleet's Deep Space K-7 by functionality and make-up. The station is divided into five sections although they are unmarked in-game.

As part of the Archanis Sector, the Ganalda system, especially Ganalda IV, was heavily involved in recurring conflicts between the Klingon Empire and the Federation over the 23rd and 24th centuries. In 2409, the shakedown cruise of the new flagship of the Klingon Empire, the Bortas Battle Cruiser, was succesfully conducted in the direct vicinity of Ganalda Space Station despite a short interference by Starfleet.

The central area of the station is where players can find various NPCs involved in PvP missions for the space station.

The generals office is located by going through the bottom-right corner of the central area and into a door. 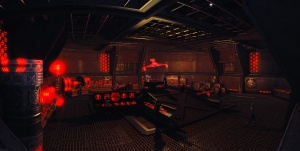 The shipyard and exchange

The Shipyard and requisitions area is located on the left side of the station. In this area players will find access to the Exchange, bank, fleet bank and Mail all via consoles at the back of the room. This area is also where players can use dilithium and Energy Credits for the requisition of starship weapons, equipment, consoles and starships. In the central area of this room players can also customize their starship and use dilithium to requisition a wide array of end-game items for both ground and space. 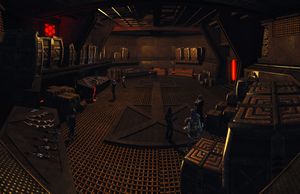 The armory section of the space station is where players can requisition personal equipment and ground weapons for dilithium. There is also an clothier in this area that allows players to change their clothing. 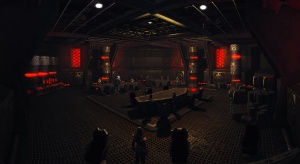 The lounge area of the space station is an area where players can negotiate deals with two NPCs for items. In this area players can also requisition Bridge Officers. 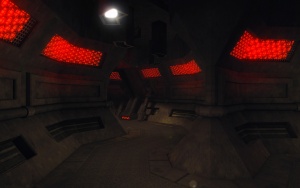