Gamma Recruitment was available for a limited time on the following dates:

Any Jem'Hadar or Jem'Hadar Vanguard character created during this Event, provided they complete the non-repeatable introductory mission

“Turn the Tide” during this period will remain a Gamma Recruit indefinitely, allowing players to progress through objectives at their own pace, with certain benefits available for their whole account.

Jem'Hadar First is given the [Dominion Transponder] by Loriss.

This meeting is classified.

You are one of a special breed, chosen by the Founders for great things.

To that end, we will supply you with special gear and training.

Use this transponder to directly contact us on a secure channel.

And do remember - victory is life. 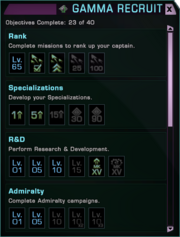 Join other captains in a Fleet for additional bonuses.