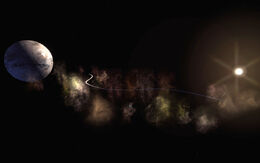 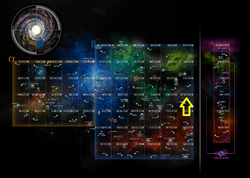 The Galorndon Core System is a system located in the Narendra Sector of the Beta Quadrant.

A geologically unstable, uninhabitable planet, Galorndon Core orbits a Class K star with a magnitude of +7. The planet is beset by constant electromagnetic storms that interfere with sensors and transporters. In addition, prolonged exposure to the planet's intense magnetic fields will result in synaptic breakdown. Away teams are advised to use caution. In 2366, a Romulan scout ship crashed on the planet's surface. The Starfleet vessel U.S.S. Enterprise-D was sent to investigate, and recovered a single survivor from the crew.