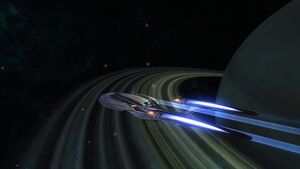 A ship at full impulse

Full Impulse is a mode for travel on system (non-sector space) maps which diverts nearly all the ship's power to the engines, increasing speed by around 2 to 3 times regular impulse.

While power is transferred, all other subsystems drop down to 5 until Full Impulse mode is ended either manually or on entering combat. Entering combat immediately from full impulse is not advised due to the low power levels to shields and weapons, although this can be mitigated through effective Electro-Plasma System Flow.

The Full Impulse Energy Shunt skill can increase the amount of engine power at Full Impulse from 100 to 125 and reduces the power loss to other subsystems from 5 to 25. Impulse Expertise increases impulse speed and turn rate.