Spirits are haunting an old Cardassian-built medical facility on Bajor. The terrified patients and staff fear the apparitions are the tormented souls of Bajorans tortured and killed during the Cardassian Occupation. With the pain of Cardassian atrocities still raw after 50 years, Kai Kira has asked Starfleet to investigate. 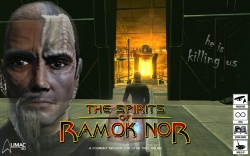 The player is sent to Deep Space 9 for a briefing from Admiral Marconi, who explains that Kai Kira has asked Starfleet to investigate a series of strange apparitions at the Opaka Medical Facility on Bajor. The facility was once a Cardassian prison by the name of Ramok Nor, and the Bajorans fear that it is being haunted by the spirits of those who suffered at the facility during the Cardassian Occupation of Bajor.
Upon arrival at Bajor, the player meets with Lieutenant Flek aboard the U.S.S. Yetholm, who has already begun an investigation on Bajor. When the Yetholm is urgently recalled to DS9, the player must continue the investigation at the medical facility.
After interviewing staff and patients at the facility, the player discovers an apparition and works with Arkim Lon, the Kai's attaché, to complete a scan of the phenomenon. The apparition appears to be a temporal incursion, and a life form at the center of the incursion delivers a message to the player. Arkim Lon believes the incursion is the work of Telor Kressad, a notorious scientist and war criminal from the Occupation. The player is offered a choice: use the Orb of Time to travel back in time and stop Kressad's experiments, or abandon the mission to avoid violating the Temporal Prime Directive.
If the player chooses to continue, they travel back to DS9 and steal the Orb from the Bajoran Temple on the Promenade, before using it to travel back to the Bajor System during the Cardassian Occupation. After beaming down to Ramok Nor, the player must face Telor Kressad in order to discover the truth.

<rank>, there's a strange situation on Bajor I'd like you to look into.

Staff at the Opaka Medical Facility in Dahkur Province have reported seeing... 'spirits'. They believe they’re seeing the tormented souls of Bajorans who died in the facility during the Cardassian Occupation.

Starfleet wouldn't usually investigate ghost stories, but the Kai herself asked me to look into this.

This is not an 'all guns blazing' mission. The Bajorans are understandably sensitive about atrocities committed during the Occupation. I need you to investigate and resolve this mystery for us.

Report to me on Deep Space Nine for further instructions. I'll meet you on the upper level of the Promenade.

Travel to Deep Space Nine in the Beta Ursae Sector Block and meet Admiral Marconi on the upper level of the Promenade.

Back to the future[edit | edit source]