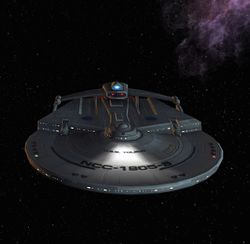 The U.S.S. Toledo on a deep space assignment. 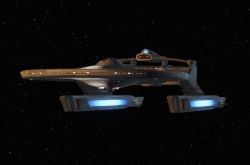 The U.S.S. Toledo ready to warp.

The U.S.S. Toledo is a Miranda-class vessel.

Classified as a Federation Cruiser, this frigate is considered the workhorse of Starfleet. The vessel consists of a primary saucer section (akin to the refit Constitution-class) with additional decks and two shuttlecraft bays; two warp nacelle pylons positioned on the underside; and a "rollbar" configuration with additional sensors and weaponry.

In terms of weaponry, design and speed, the Toledo is capable of a huge variety of roles, from performing scientific duties to deployment in major confrontations. While outclassed by a wide-range of newer, more technologically advanced starships, vessels like the Toledo still fulfill some of the most vital roles for the Federation.

The Toledo has a critical role in the Foundry mission "Hidden Intelligence."

The final mission of the Toledo occured in System JFS-47 within the Pi Canis Sector. (See Foundry mission: "Starfleet Experimentation.")