A routine mission to ferry an unknown substance from the edge of Federation space to Memory Alpha turns deadly.

You are ordered to System JFS-47 (Pi Canis Sector) to rendezvous with Captain Thl'ryk of the Miranda-class U.S.S. Toledo, a Federation vessel with a remarkably unique scientific find -- and a covert participant in a Starfleet Intelligence mission. 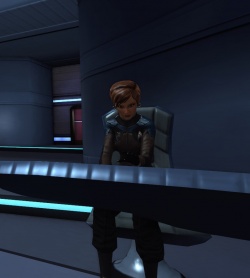 Your vessel locates the Toledo within a micro-nebula/asteroid field and beams aboard. You beam aboard to talk with Captain Thl'ryk (species: Sauremen), then Lieutenant Petria Jones, the Science Officer who has made the amazing discovery. After further conversations with Captain Thl'ryk, you return to your ship with a sample of the discovery (a still-uncataloged, unknown substance) for transport to Memory Alpha. Your ship is ready to warp out from the system. However due to the interference of the micro-nebula and the asteroids that litter the system, you must find a suitable place to warp out from.

As your ship finds a suitable location, the Toledo vanishes.

You return to the original location of the Toledo, but instead find a destroyed vessel. After scanning the debris, the player finds the Toledo's log buoy -- and listens to the last few minutes of the log recordings. You discover something went horribly wrong with the warp core. Upon scanning the remaining warp nacelles, your ship finds no physical reason for the destruction of the Toledo. However, your Science Officer discovers trace remnants of the unknown substance. Could it be the cause of the Toledo's destruction?

After checking access logs and the immediate area, a ship-wide scan is initiated to locate the substance. As your Science Officer fears, the substance has gone loose and is heading towards your vessel's warp core.

You discover a small amount of the mystery substance remaining behind, happily occupying the insides of a console. You must find a container to collect this errant substance, then run some experiments to find a way to save your own ship -- with the help of Research Science Officer T'mak, who assigned to the science lab, or succumb to the same fate as the Toledo.

<Rank> <Name>, Captain Thl'ryk of the U.S.S Toledo has passed on a request for some assistance. Normally I would not even consider passing on a request, but apparently Starfleet Intelligence is eager for the U.S.S. Toledo to continue its mission uninterrupted. Captain Thl'ryk has asked for someone to meet him in the [MissionInfo]JFS-47 system within the Pi Canis Sector Block[/MissionInfo], and collect an unknown substance that they discovered recently.