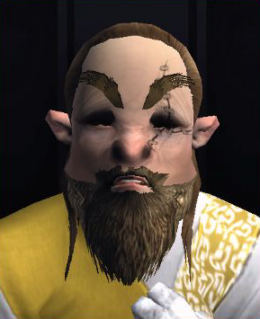 Duft Grazorak is a character created by Woghd for The Foundry. He originally appeared in the titular mission "Grazorak City". Although he is cast as a villain, his character is actually much more complicated than that.

Duft Grazorak was once a highly decorated Starfleet Captain. Although largely forgotten, his fame once approached that of the greatest and most celebrated captains of all time, right along side of Archer, Garth of Izar, Pike, and Kirk. He bears a facial scar resulting from his attempts to save the lives of several fellow officers during his victory in the battle of Corvus III.

According to official sources, this battle never even occurred. The details of this battle have been sealed, although rumors tell an interesting and somewhat unsettling story. According to unofficial sources, Duft Grazorak learned of an impending attack on Earth from VULCAN. Having no ears who would listen to his concerns, he pirated his own starship and met the fleet. Alternate sources say that he led a classified fleet of starships to meet the attack of starfleet orders. Regardless, it is known that Grazorak's vessel, the Photo Kappa II, was the only one to return. All records of the confrontation were sealed.

Whatever the events of Corvus III, Grazorak became disillusioned with Starfleet and resigned, in spite of the fact that he was decorated for valor, and awarded the Photo-Kappa II as personal property. Grazorak quit Starfleet anyway. His service record was then sealed, and his exploits became little known after that. Grazorak often complains that his history was erased by Starfleet, and that Starfleet cannot be trusted.

It was not very long before Duft Grazorak, with his personal starship, formed a loose association with the Orion fleet and began making a name for himself as a smuggler and pirate. It should be noted that there is no record of any attack on a freighter, instead his escapades include a long list of attacks on smugglers, klingon raiders, prison breaks, and even Orions. His reputation as a pirate who preys on pirates lent many to wonder if he was not, in fact, still Secretly working for Starfleet.

After Khitomer, Starbase L-10 was decommissioned and sold for scrap to a private businessman from Earth. The salvage operation never happened, and the space station changed hands several times until it came into the posession of a Ferengi merchant named Ogna Grimt. Ogna spent a great deal of latinum making repairs to the station in hopes of making it operational as a private venture. This eventually failed. It is not known what the exact circumstances were, but Duft Grazorak aquired the partially recovered station from Ogna, and built it into what is now known as "Grazorak City", a luxury resort where the ultra wealthy come to vacation. Grazorak City offers all manner of recreation, and also functions as a re-supply port. Unverified sources say that Duft Grazorak also makes a healthy profit from Grazorak City as a center for smuggling, money laundering, slave trading, and weapons dealing.