Starfleet Command has requested your return to System L-374 to help track down the missing museum starships, last seen in the episode "Camelot Under Siege."

Start in the Veela System (Regulus Block) where you will visit the husband of a colleague from the prior mission. From there, you will receive your mission orders. 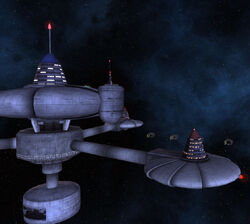 Summary: Following the events of Foundry mission "Camelot Under Siege", Starfleet Command has ordered your return to System L-374 to assist with the retrieval of the lost museum starships.

You start at planet Psi Serpentis V (close to the Veela System within the Celes Sector/Regulus Sector Block). Your player has beamed down to Research Station Theta, where you make a condolence call to Commander Andarr, the husband of a fallen colleague/classmate, Captain Andros. (As mentioned at the start of the previous mission.)

Andros had been replaced by the Undine, an alien race capable of shape-shifting (with biogical enhancements) and infiltration. As you learn, Andros is still classified as "Missing In Action" (M.I.A.), not deceased, as Captain Nyla of the U.S.S. Canberra is searching for her. However, past incidents with the Undine would indicate they leave no traces of their victim, meaning Andros had been killed.

While discussing the loss, a transmission arrives from Commander S'lor at Starfleet Command. Since the events of "Camelot Under Siege", your prior request to rejoin the search for missing Camelot Station museum ships in System L-374 has been approved. You are ordered back to System L-374.

Your player is contacted by the station, then beams aboard their operations hub, known as "Command Center."

Once aboard, and after conversing with two of the station's personnel, your player joins a congress of Starfleet officers. Like your player, they are tasked with the retrieval of five missing Starfleet museum ships which disappeared following the prior Borg attack on the station. You will be accessing the Borg Transwarp Gate which was brought into the system by the Borg incursion -- and reactivated to access the Delta Quadrant. The museum ships had been used to evacuate the entire station during the aforementioned Borg attack. It is theorized the museum ships evaded the Borg by escaped through their gate. Since those actions, the gate had been closed. Those museum ships were locked out from returning to the Alpha Quadrant.

With a full debriefing completed, plus introductions to the various officers, your player (along with the crews of the U.S.S. Righteous and U.S.S. Herschel) prepares to start the rescue mission. However, you learn of an engineering issue which will delay the start of the mission. The other ships are prompted to re-start the gate while you conduct repairs.

With repairs completed, your vessel flies towards the gate's location within System L-374. The gate is activated before you arrive -- and a massive Borg cube emerges immediately from the re-opened gate. The Righteous is disabled during the firefight; the Herschel is destroyed (or disabled, depending on game play). Your player is implored to continue the mission, taking aboard members of the Righteous, including their first officer, Commander Darcy Wyatt.

The player will have limited time to return, once the mission is started.

Your vessel accesses the Borg Transwarp Gate... and is transferred 60,000 light years away, deep into the Delta Quadrant!

When your vessel reaches the asteroid, you find there are artificial structures built into the rocky mass. All five Federation museum ships are docked. But there are no signs of life.

Your player begins an investigation which reveals the fate of the museum ship crews -- and a discovery which could embolden the Borg into a truly unstoppable threat to the entire galaxy!

Your mission, per Starfleet Command:

To avoid compromising our Borg Transwarp Gate, you will NOT have your own access from the Delta Quadrant. We will re-open the gate at a specific time for five minutes. This will be done three times ONLY. Your vessels will only be given this information.

Starfleet will have ships from Starfleet's Fifth Fleet to stand watch on our side of the gate.