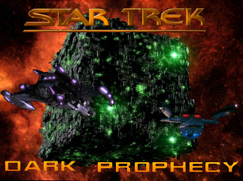 In the Dark Prophecy series, the player follows a story detailing about a conflict between the Borg and the Dominion.

The player is send out to the Gamma Quadrant for a diplomatic mission to the Dominion. Upon arriving at the provided coordinates, he finds a disabled Jem'Hadar Attack Ship and a guarding Borg Cube. After defeating the cube he beams towards the bridge of the attack ship, where he meets the Vorta Gelrun and the Jem'Hadar Etan'Okat. He learns of a Borg invasion in Dominion space and agrees to help them in the Spino system. He finds a Transwarp conduit over a Dominion mining facility. He beams into the facility to get some explosives to destroy the conduit. After returning to the ship, the conduit goes active, sending in probes and cubes. At the moment that 5 cubes enter the system a Starfleet battle group, led by the U.S.S. Typhoon, warps in and together they destroy the Borg in the system. When the player is returning to Deep Space Nine to report, he is intercepted by the Prophets, who tell him that the Borg are going to attack them.

In the second part, Resistance, the player helps with the defence of the wormhole. The Borg send in wave after wave to defeat the defences and beam into the station itself. The player follows the Borg and defeats the Borg Drone, who are attempting to assimilate the station. After beaming back, he finds out that reinforcements have been destroyed and that he stands virtually alone. He cannot prevent several cubes entering the wormhole, but a Klingon fleet decloaks and opens fire on the Borg. The player hurries inside the Wormhole, where the last Borg are stopped.

In the final part, Into the Pit, the player travels back to the Gamma Quadrant and participates in a massive Dominion attack on the Borg in the Delta Quadrant. He finds a Founder who has been missing since the outbreak of the Dominion-Borg war. He also finds and kills the assimilated Gelrun 3. In the conclusion he defeats a Borg Battlegroup, commanded by Osephus of Borg.