Foundry:Clash of the Titans (DP1) 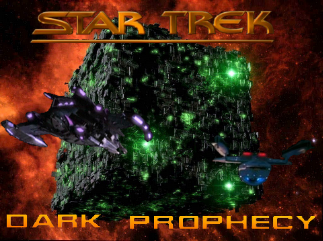 In the first part of the Dark Prophecy series, the player helps the Dominion to defend against a Borg invasion, while learning of a disturbing move the Borg are about to make.

The Player gets orders for a diplomatic negoiation with the Dominion. He is told to meet a Vorta, Gelrun, at a location in the Spino system. Once he arrives there, he finds Gelrun's Jem'Hadar Attack Ship defeated by a Borg Cube. After destroying this cube the player beams towards Gelrun's ship. He tells that the Dominion are at war with the Collective and orders the player to learn about this invasion from a Dominion database. Once the player has learned the information, he proceeds to help the Jem'Hadar eradicating the Borg in this system. While doing this, he finds a Borg Transwarp conduit over a Dominion mining facility. Scans of this conduit show that it won't resist against a massive explosion from the inside. The player beams into the mining facility to beam up weapon crates to be detonated. He also fights off Borg drones and a Borg Captain. Back in space he finds out that the Transwarp gate went active and that the Borg are coming through it. After defeating an initial wave of Probes both a Starfleet task force and a Borg fleet arrive in the system, with the result of the destruction of the Borg. When returning to the Alpha Quadrant to report to Admiral Marconi, the player is intercepted by the Prophets. They tell him that the Borg are about to attack them, and that the player is the only hope for defense they have.

They will be shown in non-bold, gray text.