The Righteous is an Avenger-class vessel.

Classified as a Star Cruiser, the Avenger-class has a shorter, more round saucer section with stylings reminiscent of the Sovereign Assault Cruiser. Its nacelles have a pointed edge on both ends -- with Bussard collectors recessed to the side and is pushed forward by upward pylons. It has elevated fins that trace the hull and saucer section.

The Righteous has a distinguished record, having served as the flagship of Starfleet's Fifth Fleet for over 18 months, following the destruction of the Vanguard-class U.S.S. Spearhead at Donatu V. The vessel has survived more than four hundred missions, including forays against hostile Klingon, Romulan and Borg forces, all under the command of Captain Talurr.

Due to the strenuous requirements of being Starfleet's Fifth Fleet flagship, the Righteous has endured far more battle damage (spaceframe warping, hull fracturing, and countless hours of repair work) than most Starfleet starships ever endure. As a result, the Righteous might be retired or replaced within a ten-year operational cycle.

The vessel and its crew make their first appearance within the Star Trek Online (STO) universe, starting with the Foundry mission, Camelot Under Siege, then Dreams of Salvation and Glory.

The Righteous is normally stationed within Sirius Sector, although it has been temporarily reassigned to System L-374 within the Celes Sector (Regulus Block). The vessel includes the Federation museum Camelot and nearby space lanes, following an attack by the Borg, as part of its patrol route. 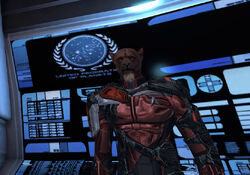 Captain Talurr of the U.S.S. Righteous.

NOTE: The Righteous crew has received one reprimand, regarding an incident at Drozana Station, where the vessel was regarded as a "space whale" and a "shovel" during a bar room exchange with rowdy Nausicaans. As a matter of pride, various Righteous crew members fought the Nausicaans over the perceived slandering of their valiant vessel.

As representatives of Starfleet and the Federation, the entire Righteous crew was disciplined to show further need for restraint and upholding honor and self-worth in the face of adversity, particularly as the flagship of the Fifth Fleet.