Summary: A Borg attack on a Federation museum (to obtain experimental Federation warp technologies) may aid their assimilation of the Alpha Quadrant. 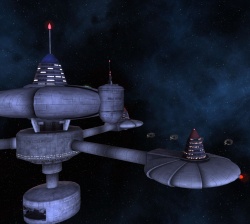 After lengthy deep space patrols, your vessel is summoned to Earth Spacedock for resupplying, plus a debriefing with Admiral Quinn's staff. Despite requests for shore leave, your debriefing is cut short when Starfleet Command receives distress calls from the Federation museum known as "Camelot" in System L-374. You are ordered to warp to System L-374 to rendezvous with the Aurora-class science vessel U.S.S. Valley Forge to render assistance.

Upon reaching System L-374, the Valley Forge is transmitting its disaster beacon. Your vessel must first render aid to the disabled Valley Forge, recover important data to conduct tactical analyses of the situation, and rescue survivors.

Given the escalating emergencies, Starfleet Command has dispatched the Fifth Fleet, led by Captain Talurr of the Avenger-class U.S.S. Righteous, to help you. You are under orders to continue your mission until their arrival.

Your ship continues to the Camelot Station, facing space-borne Borg adversaries, neutralizing Camelot's defenses, investigating the nearby fleet museum shipyard, then beaming aboard the station itself to assess the situation.

The reasoning for the Borg attack is revealed during the course of play.

The mission concludes with the arrival of Starfleet's Fifth Fleet to help you stop the Borg from completing their mission. New insights into Borg developments across the Alpha Quadrant are also revealed.

Note: System L-374 was part of Star Trek lore, first mentioned in the TOS television episode "The Doomsday Machine" (televised October 20, 1967) as written by noted sci-fi author Norman Spinrad. Despite the location, the doomsday device does NOT make an appearance, although it is referenced within the character dialogue.

Located in System L-374, the Camelot Station was established in 2404 as an archival museum of Federation history. Over twenty million significant historical items, ranging from experimental Starfleet warp tech to the famous (and infamous) Captain Garth of Izar's hand-written journals, are part of the vast public museum collection. Your vessel is responding to a distress signal...