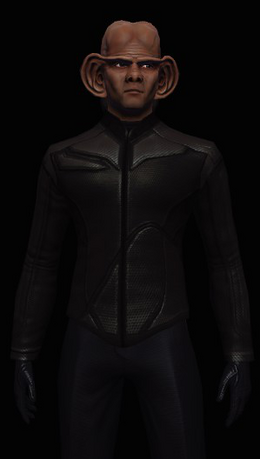 Grell is a senior Section 31 agent created by StarSwordC for the Foundry.

Grell initially served primarily as a cryptologic technician aboard the Ferengi Alliance ship The 62nd Rule. He also discovered he had a knack for fieldwork, and was decorated for proficiency in unarmed combat. During that time he made the acquaintance of Agent Franklin Drake and fed him intelligence on a regular basis.

Grell mustered out of the Ferengi military at Deep Space 9 in 2392 and spent the next several years working at Garak's Clothiers as I.T. support. He eventually acquired Federation dual-citizenship and was recruited into Section 31 by Drake. Most of his service record since then has been redacted, but in 2404 he was promoted to supervising agent and made Section 31's station chief for the Beta Ursae Sector Block.

Grell maintains contacts in the Ferengi Alliance and elsewhere.

In contrast to the usual portrayal of Section 31 agents as inscrutable and largely humorless, Grell is a bit of a joker, especially enjoying the fact that nearly everything about him is classified. However Grell is also extremely protective of his underlings, whether they are temporarily or permanently assigned to him.