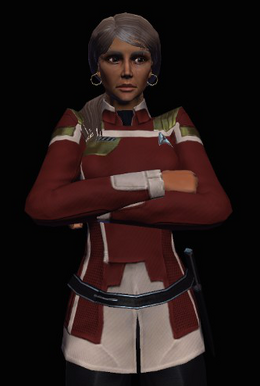 Amnell Kree is a Starfleet admiral created by StarSwordC for the Foundry. A decorated Dominion War veteran, she is currently the C.O. of the Marduk Carrier Battle Group, a permanent task force used by Starfleet for troubleshooting and surgical strikes.

Born in 2340 on Trill as Amnell Rovel to a Starfleet science officer, she was accepted to Starfleet Academy on tactical track. During her freshman year she was implanted with the Trill symbiont Kree, previously hosted by Edrin Kree (nee Ming). She received multiple awards for marksmanship and piloting proficiency and graduated top of her class in 2362; however she was disqualified from being valedictorian on grounds of serial discipline infractions.

Kree served as a shuttle pilot or flight control officer on various ships before being assigned to the Utopia Planitia Shipyards' Carrier Tactics Development Program. As the Dominion War loomed, she was reassigned to the U.S.S. Abraham Lincoln as executive officer of her newly formed Peregrine Fighter squadron. In the war proper, she scored nineteen confirmed kills, including a Galor-class destroyer at the Third Battle of Deep Space 9, and was eventually made C.O. of the Lincoln's fighter wing. She was wounded at the Battle of Cardassia, presumably the source of the scarring on her face.

After the war ended Kree was promoted to captain and took command of the Akira-class starship U.S.S. Suquehanna. Soon after she was reassigned to command the U.S.S. Armitage. She was eventually promoted to Rear Admiral and assigned to the Advanced Tactics Research Office, where she oversaw the design and early construction of the U.S.S. Marduk, a variation on the Prometheus-class featuring a fighter bay instead of multi-vector assault mode.

Upon gaining her fourth pip she was assigned to Starfleet Command, but eventually had a falling-out with Fleet Admiral William T. Riker and asked to be transferred back to field duty. She was assigned to head up a battle group centered on the U.S.S. Marduk and was assigned Captain Bronok Zell as her flag captain.

Kree is of average height, slim, and muscular, with heavily greyed brown hair and green eyes. She has severe scarring over her left eye and carries a Terran Empire combat knife in a belt scabbard.

Kree comes across as rather stern and gruff and does not suffer fools gladly. She rarely smiles.