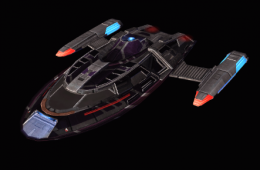 The Ripper Corvette is a frigate used by the Tzenkethi Coalition armed forces. It is comparable in performance and armament to the Reman version of the T'varo Light Warbird and features the ability to temporarily mask its warp signature to evade detection.

If the mission is played as a part of a team, Ripper Corvettes may appear in “Bait and Switch, Part II” as part of a Tzenkethi battle squadron under the command of Tivahr Desh Zen-C.