Fleet Tribble is a Tribble: a cute, round, furry creature that purrs when touched. It has a tranquilizing effect on most races.

A large colony of tribbles was recently found infesting a circuit conduit that controlled industrial replicator functions for a Fleet Starbase under initial construction. This environment has somehow adapted their physiology with the ability to occasionally produce useful materials that can be used the further advance Fleet Projects.

This Tribble is Polygeminus grex communitas. 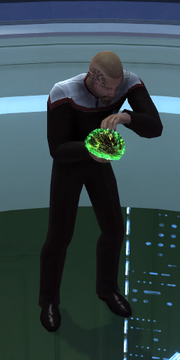 Awards following resistance buffs for a duration of one hour

This is a limited time reward. Players who logged in between July 6th 2012 through July 9th, 2012, and spent at least one hour on the Tribble Test Server testing content for the then upcoming Season 6: Under Siege could claim this from the "Items" tab in the Zen Store. As of June 8th, 2017, the fleet Tribble was added into the Phoenix Prize Pack as a T5 (Uncommon) reward. (It is still at epic level but requires an Uncommon Prize token to buy.