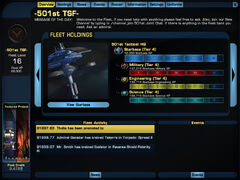 A fleet in Star Trek Online is a group of up to 500 players that have banded together. Fleets have a standard command structure and management tools commonly found in other MMORPGs for guilds, e.g., a rank system, a fleet bank, a fleet specific chat channel, a calendar, and - most importantly - a Fleet Advancement System with different fleet holdings. Up to 13 fleets of the same faction can also band together to form an Armada to share resources and earn passive bonuses.

With Season Six: Under Siege, a dedicated advancement system for fleets was introduced. It allows the fleet to build and develop various fleet holdings:

Increasing the tier of holdings is achieved by completing projects within their respective departments. As all fleet members can contribute, these projects require large amounts of various resources, first and foremost fleet marks

As a fleet develops its holdings, it gains "Fleet XP", thereby increasing its "Fleet level". This is advanced one level for each tier a fleet holding or one of its departments being upgraded. For reference, having reached the maximum tier of the starbase, the embassy, the dilithium mine, the spire, the research lab, and the colony world (including all their respective departments), a fleet will have achieved level 85. The fleet level indicates a fleet's maturity and progression, and forms a total Armada level if the fleet is part of one (explained in the section below). 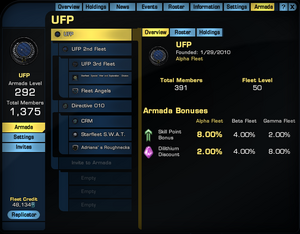 Since Season 10.5, fleets of the same faction (i.e., Klingon or Federation) can also band together to form a "Fleet Armada". Armadas are composed of up to 13 fleets arranged in an hierarchical system. The top level fleet will be called the "Alpha Fleet", which can invite (and kick) up to 3 "Beta Fleets", which, in turn, can each invite (and kick) up to 3 "Gamma Fleets".

Fleets in an Armada (which will always be named after its Alpha fleet) can view each others member rosters, contribute resources to each others Fleet Advancement System (member fleets can toggle to block individual resources from being contributed), and will receive two passive buffs:

Note that the strength of the buffs (maximum 20% at Armada level 700) is inverted for Alpha and Gamma fleets, respectively, but balanced for Beta fleets. The Armada level is the sum of the Fleet Levels of all the member fleets. The maximum available bonus is obtained at Armada Level 700 (though Armadas can go up to 13 x 85 = 1105 if they have the maximum number of fleets with all holdings at maximum level).

Every member of a fleet can view the roster(s), containing various information on all online as well as offline members (of the entire armada, if the fleet is member of one). Fleet information can also be downloaded by clicking the "Export" button in the fleet Roster tab, or by typing "/ExportGuildMemberList filename.csv" (where you can put in any filename you wish), which is then saved to the game's Live folder. The spreadsheet contains data on the following: Character Name, Account Handle, Level, Class, Guild Rank, Contribution Total, Join Date, Rank Change Date, Last Active Date, Status, Public Comment, Public Comment Last Edit Date, Officer Comment, Officer Comment Author, Officer Comment Last Edit Date.

The fleet bank is a universal storage facility for inventory items and credits that is accessible by all members of your fleet who have the proper permissions. Fleet banks are universal; items and Energy Credits placed into any fleet bank will appear in all fleet banks throughout the galaxy and are available for retrieval no matter which fleet bank is visited.

Fleet banks are a part of the normal bank terminal and can have up to 8 tabs of storage space. The first tab is available to the fleet automatically; additional tabs must be purchased for a cost of 1,233,000

The maximum amount of

In Star Trek Online, fleets can also create their own specific emblems and uniforms. These can be previewed and edited (if a member has sufficient permission) in the "Uniform" section of the main fleet window. Members can then visit a tailor and activate their "Fleet uniform" slot. The uniform may then be chosen as a pre-made costume option, whereas the emblem can be displayed as a shoulder patch on a member's character and as a painting on his or her ship.

There are a few simple requirements to be met to create a fleet:

While a team of five is required to form a fleet, once formed it can go down to a single member. The maximum limit is 500 members, after which invitations would give the error "[Fleet] Error inviting to fleet: <Fleet Name> has reached full capacity. You must remove members to add new ones."

Some other tidbits about fleet creation: