"They are somewhat enigmatic, but encouraging - especially where tranya is concerned." - Kuumaarke's Log 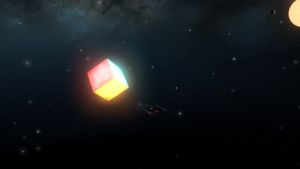 By the 25th century, the First Federation still exists, and exports Tranya, but Alliance starships require special permission to enter First Federation space. Their border is maintained by special buoys. They maintain diplomatic relations with relative newcomers to the galactic stage, such as the Lukari.