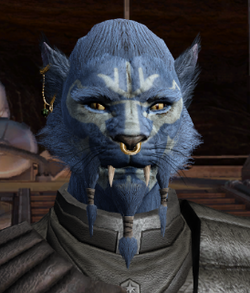 A Ferasan Commander in the KDF

Ferasans are a genetically augmented felinoid species from Ferasa Prime that split from the Caitian race 800 years ago.

The Ferasans and Caitians were once a unified species, but an extensive genetic engineering program has greatly modified the Ferasan genome. Ferasans consider themselves to be superior to Caitians, and most relish the chance to prove that superiority in combat. Ferasan society is dominated by clans of inter-related family groups who band together for defense and conquest. Loyalty is highly prized among Ferasans, although betrayals are common. The greatest honor a Ferasan can give to a clanmate or Captain is to remain faithful through adversity. Ferasans are a playable race in Star Trek Online for the KDF, however they must be unlocked from the Cryptic Store for 600

Unlike Caitians, Ferasans are saber-toothed and some have telepathic abilities. They are bipedal, have tails that assist their balance, extended maxillary canine teeth and large eyes with excellent night vision. Their skin is covered with a soft fur coat, and their felinoid ears can pick up frequencies that most humanoids are unable to detect.

Players who purchase playable Ferasans also unlock new cosmetic options for any Federation Caitian character on their account if they have also purchased playable Caitians.

Ferasan duty officers are only available for the Klingon Empire.