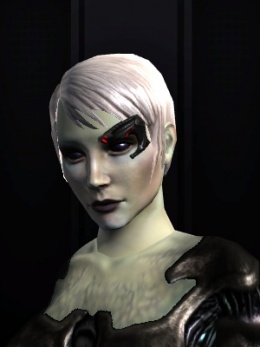 or by purchasing a Special Requisition Pack from the Exchange. It came bundled with the game for those players who pre-ordered the Amazon Collector's Edition, Amazon.co.uk Special Edition retail exclusive, or the Newegg.com Logitech bundle.

By default, the appearance of the liberated Borg bridge officer candidate is of the cybernetic suit typical to Borg drones, but this can be customized at the tailor as with standard bridge officers. This allows players to change body and facial characteristics, and use any uniforms available to them.

Note: Unlocking this candidate does not allow characters to claim the Klingon equivalent candidate, which must be purchased separately.

Rescued from the Borg, this officer will bring her experience as a Borg drone to your Bridge Crew!

Players who purchased this officer prior to Season 5, or received it via the Amazon pre-order / Logitech bundle can claim this item for every Federation character on their account from the "Legacy Unlocks" section of the C-Store. It's received as a candidate and is bound.

Starting with Season 5, this officer became a single-character unlock when purchased from the C-Store. The officer now comes packaged in a crate, which can be traded between characters, players, or sold on the exchange. When the crate is opened, the officer becomes a candidate and is bound to that character.