Escorts are compact, maneuverable vessels capable of extremely high damage at the expense of defense and survivability. As the name suggests, Starfleet typically deploys these ships to accompany larger vessels and defend them from attacks. It should also be noted that Federation diplomats also prefer the term 'escort' over 'warship' to avoid aggressive connotations, even though these vessels have been deployed as such in numerous conflicts in the 25th and late 24th century.

Compared to other Federation vessels, Escorts have medium hulls and weak shields, losing 10% shield capacity over Cruisers of the same tier. All Federation Escorts at tier 2 (Lieutenant Commander) and above have 2 device slots and gain a bonus +15 weapons power. 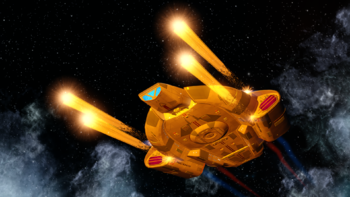 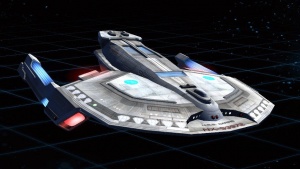 The Escort vessel is the first set in the Escort category of starships that Federation players have access to. The Escort is a late 24th century model, brought into service to combat the Borg. The design saw extensive action in the Dominion War, where Starfleet officers enjoyed its heavy armament and compact target profile. 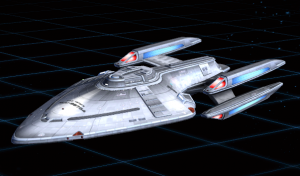 The Advanced Escort is one of the most versatile ships ever designed by Starfleet. The ship was designed to run long range missions behind enemy lines on the Romulan front. 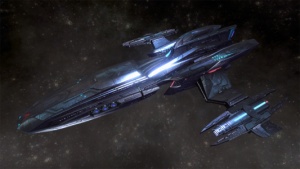 The Andorian Kumari Escort line is named in honor of the first Andorian Battle Cruiser, the Kumari, captained by Commander Thy'lek Shran in the 2150s. The Andorian Light Escort is a lightweight vessel that uses a similar design to Shran's Kumari, but comes equipped with the latest developments in Federation technology. The Kumari line's integrated Wing Cannons are among the most powerful weaponry ever seen in the Alpha Quadrant. 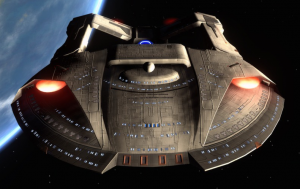 The Steamrunner class has been around since the late 24th century, but due to it's reliability and effectiveness, it is still in limited use today. The Steamrunner class saw significant action in the Battle of Sector 001 against The Borg, as well as countless battles and sorties during the Dominion War. Simply put, the Steamrunner is fast, agile, and tough. 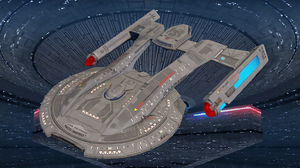 The Heavy Escort was designed to serve as a heavy gunship and carrier to protect space stations and ships devoted more to exploration than firepower. Heavy Escorts served in most major conflicts in the Dominion War, and were instrumental in defending Earth from the Borg.

After Starfleet starships were converted to a modular design, a group from the Starfleet Corps of Engineers working at Utopia Planitia wondered if vessels from the Federation's past could be constructed in this manner. The NX Class Starship Replica sports the classic look of Earth's starships from the 22nd century, but has been updated with modern technology to meet current Starfleet specifications for Lieutenant-rank missions. 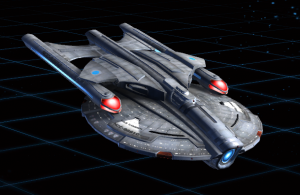 The Patrol Escort is described as small, and less accommodating for extensive engineering or science facilities. But weaponry, speed and maneuverability make them very dangerous opposition. The Patrol Escort was once arguably the toughest Escort in Starfleet. This vessel is no longer available for purchase. 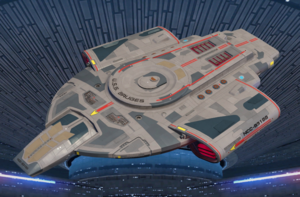 The Tactical Escort was a rescued project from the Utopia Planetia Ship Yards by Captain Benjamin Sisko. It was declared a new type of warship created to fight the Borg but later revived to fight the Dominion Wars. 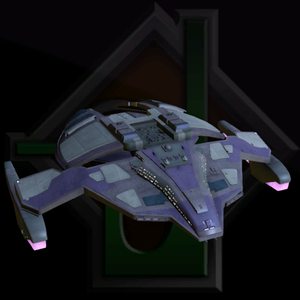 A vessel used abundently by the Dominion, a handful of these vessels have been found adrift and abandoned in the Alpha Quadrant and both Starfleet and the Klingon Defense Force have been scrambling to acquire as many of these derelicts as possible for study. This ship is one of the most sought-after ships in the entire game, as its incredibly high turn-rate, its ability to dish out immense amounts of damage and its high-survivability rating puts this ship at the top-of-the-line for all Escorts everywhere. 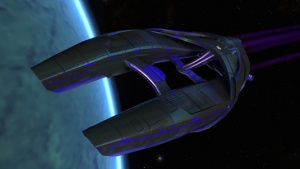 Originally designed as a racing and sporting vessel, the Risian corvette's profile is dominated by two massive warp nacelles arranged side-by-side and linked by the main hull. The main hull wraps around the rear and middle of the nacelles, with an extension set between them to allow for living space. The engines are located in a cluster of three vents towards the rear of the main hull. The deflector is also slung between the nacelles, set slightly forward of the main hull. The ship itself is the most maneuverable ship in the game, with the most base-power to Engines of any ship there is currently available - fitting for a racing ship. Other than its high-speed orientation, this ship is not as tough as most other vessels and is fairly easy to take down if slowed to a halt. 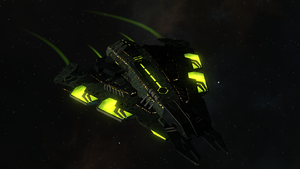 A slightly more traditional design than the Elachi Monbosh Battleship, the S'golth has a flat and largely horizontal appearance. The ship's overall appearance is reminiscent of a spearhead. The Elachi S'golth Escort is one of the most commonly seen vessels in use by the mysterious Elachi. While it is most Science-orientated than other Escorts, its combination of maneuverability and firepower has allowed this vessel to best even the largest and hardiest of starships on many occasions. 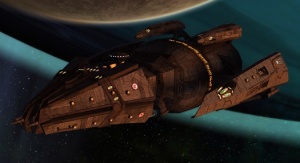 Looking almost like a miniature version of the Apex Battlecruiser, the Hunter shares the same worn and used appearance in its various material colors, ranging from rust brown to dark gray. The command section is wedge-shaped with a blunted point, separated from the cylindrical secondary hull by a rectangular "neck". The secondary hull features an illuminated belt that goes around the diameter of the hull. Four outboard pieces are also attached by pylons towards the rear of the hull. Two of the outboard pieces correspond to the warp nacelles and are protected by armored shields. The ship itself is very small, being no bigger than a Nova Class Science Vessel. It has a powerful ability to survive, is extremely maneuverable and is capable of dishing out immense firepower, making the Hunter Heavy Escort a formidable opponent.

The Federation Escort is comparable to the Klingon Bird-of-Prey, where quick flying and high powered weapons can help to keep the player alive. Escort vessels have the most turn rate and are the only Federation vessels able to use Dual Cannons. This comes at the expense of low crew compliments and reduced hull strength though, requiring hit-and-run tactics to avoid prolonged or focused enemy fire. Shield strength also becomes a concern, but quick maneuvering will allow the ship to distribute the damage across stronger shield facings. Equipping cannons along with the Cannon: Rapid Fire skill also allows Escorts to dish out the damage before enemies can retaliate.