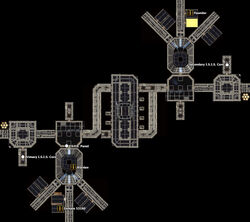 Facility 4028 is a mysterious Federation holding facility located in the Ayala System of the Beta Quadrant.

It is a high security facility manned by holograms led by the Warden and controlled by the I.S.I.S. (Inmate Security and Information System) software.